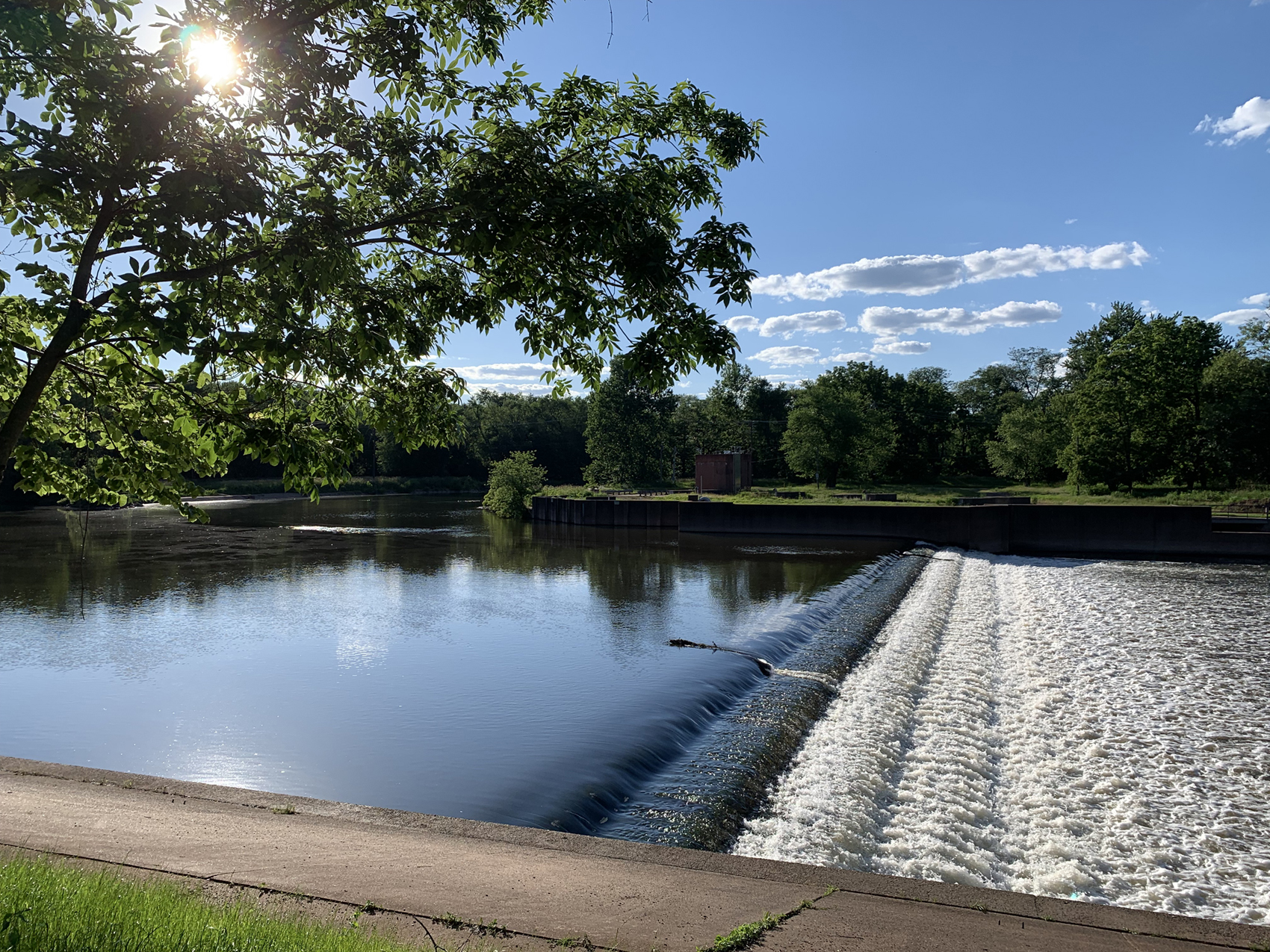 Statewide precipitation in June averaged 3.35”. This is 0.95” below average and ranks as the 57th driest of the past 127 years. The locally-varied monthly totals are shown well in Figure 1 with above and below normal totals in close proximity to one another. Generally, the northern portion of NJ was drier, averaging 2.96”, which is 1.65” below normal and ties as the 31st driest since 1895. Southern counties and the coastal region fared better, with an average of 3.61” in the south, which is 0.53” below normal and ties as the 54th wettest or 72nd driest. Coastal locations averaged 3.56” which is 0.29” below normal and is the 78th driest or 50th wettest. New Jersey stayed out of any drought categorization as enough rain fell often enough to keep things rather green. It will be important for such timing to continue or greater rainfall to arrive to keep NJ drought-free over the remainder of the warm season. 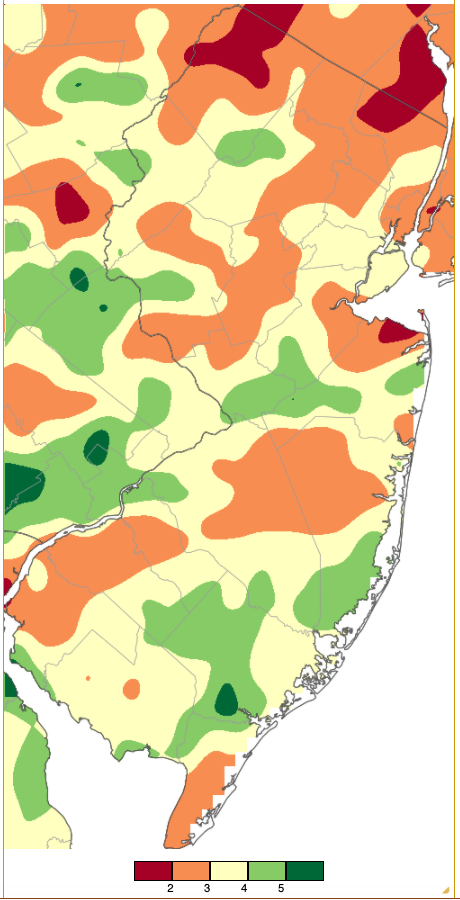 Figure 1. June 2021 precipitation across New Jersey based on a PRISM (Oregon State University) analysis generated using NWS Cooperative and CoCoRaHS observations from 7 AM on May 31st to 7 AM on June 30th. Note the scale in inches at the bottom of the figure. Totals range from 1.00”–2.00” (red) to 5.00”–6.00” (dark green).

A new station joined the Rutgers NJ Weather Network constellation on June 9th when Little Egg Harbor Township (Ocean County) was commissioned. This station is located within a salt marsh near the Rutgers Marine Science Center. It fills a gap in coastal coverage between the Atlantic City Marina (Atlantic) and Harvey Cedars (Ocean) NJWxNet stations. All equipment is installed with the exception of the anemometer that will soon be mounted at a height of 10 meters.

The daily maximum temperature equaled or exceeded 90° at one or more NJWxNet station on 12 June afternoons. The initial run of 90° days ran from the 5th to 9th. The first day of this heatwave found coastal Seaside Heights (Ocean) the warmest at 94°, followed by Jersey City (Hudson) with 93°, and 44 of the 64 NJWxNet stations between 90°–92°. The coolest location was West Cape May (Cape May) at 83° (Figure 2). 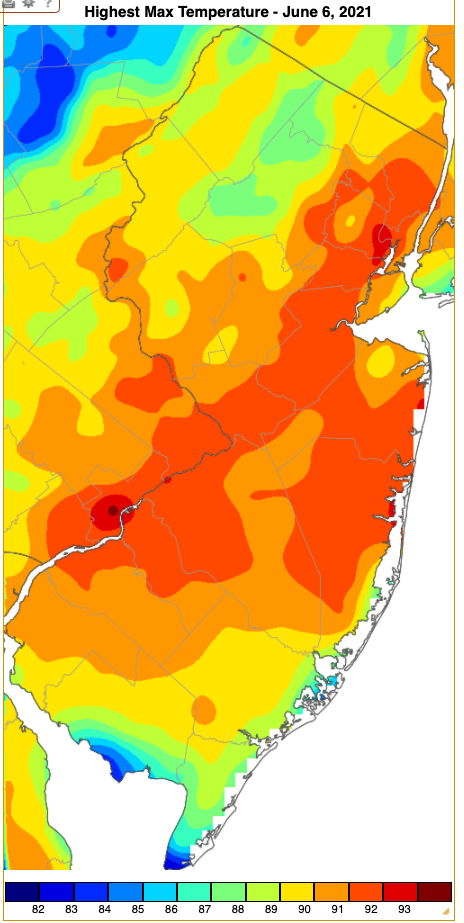 Figure 2. Maximum temperatures on June 5th based on a PRISM (Oregon State University) analysis generated using NWS, NJWxNet, and other professional weather stations. Note the scale in &deg;F at the bottom of the figure.

The 30th was the hottest day of the season thus far, with the century mark reached at the NJWxNet Jersey City station. A NWS Cooperative station in Harrison (Hudson) reached 101°. A report of a June record 103° at Newark Airport (Essex) is being investigated, as in recent weeks this location appears to be running a degree or two warmer than believed to be accurate. This has been noted not just by examining absolute temperatures but also departures from normal compared to nearby stations. Whatever the case at this station, the region was hot and humid, including 40 NJWxNet stations rising to 95°–99° and 20 from 90°–94° (Figure 3). Atlantic City Marina had the lowest high of 84°. Even High Point Monument (Sussex) got into the act, topping out at 91°. This was the Monument’s first 90° reading since reaching 90° on July 3, 2018, and the warmest at the state’s highest location since hitting 95° on July 6, 2010. Humidity levels remained high, resulting in lows again in the 70°s at 56 NJWxNet station, with Walpack at 65°. 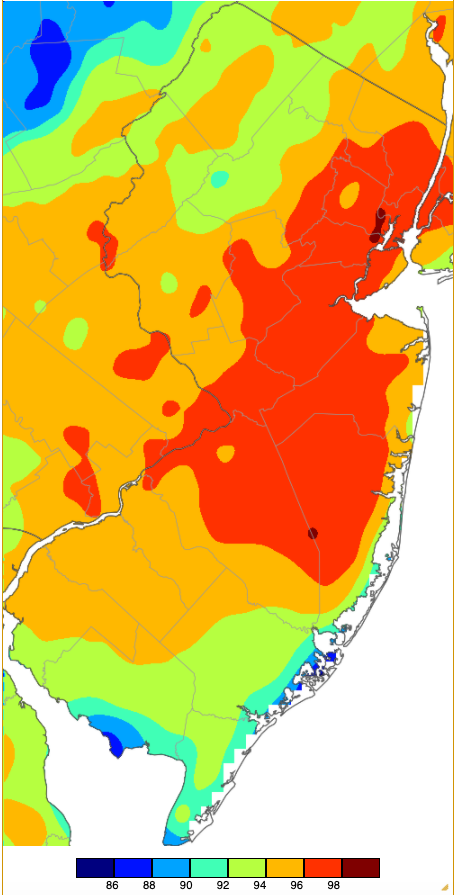 Figure 3. Maximum temperatures on June 30th based on a PRISM (Oregon State University) analysis generated using NWS, NJWxNet, and other professional weather stations. Note the scale in &deg;F at the bottom of the figure.

In between the three heatwaves were some comfortable dry days with some chilly morning temperatures, particularly in northwestern valleys. Nine days had lows in the 30s and 40s at NJWxNet stations. The 1st saw Walpack drop to 39°, with 26 NJWxNet stations between 41°–49°. Walpack was 46° on the 2nd. Cool conditions returned mid-month, with Walpack 42° and Sandyston (Sussex) 45° on the 16th. The 17th was the coldest morning of the month, with Walpack an impressive 34°, Sandyston 37°, Pequest (Warren) 40°, and 24 stations from 43°–49° (Figure 4). Dew points were in the 30°s and 40°s throughout the day. Seaside Heights and Harvey Cedars only fell to 62° that morning. Walpack reached 38° on the 18th but rebounded to 83° in the afternoon. That morning, 13 stations were between 41°–49° while Fortescue (Cumberland) only dropped to 68°.

Figure 4. Minimum temperatures on June 17th based on a PRISM (Oregon State University) analysis generated using NWS, NJWxNet, and other professional weather stations. Note the scale in &deg;F at the bottom of the figure.

There were 11 June days where a gauge in NJ picked up at least an inch of rain, with stations catching two or more inches on four of these days. The first event began with some heavy southeastern thunderstorms during the pre-dawn hours of the 3rd, with evening storms mostly in central areas. Maurice River Township (Cumberland) with 2.17” was wettest followed by Bass River Township at 1.95”, Hopewell Township (Mercer) 1.66”, and Princeton (Mercer) 1.61” (Figure 5). Of the 259 CoCoRaHS reports, 42 came in with 1.00”–1.60”. Winds gusting as high as 45 mph at Fortescue brought down some trees and wires in Mercer, Atlantic, and Cumberland counties. 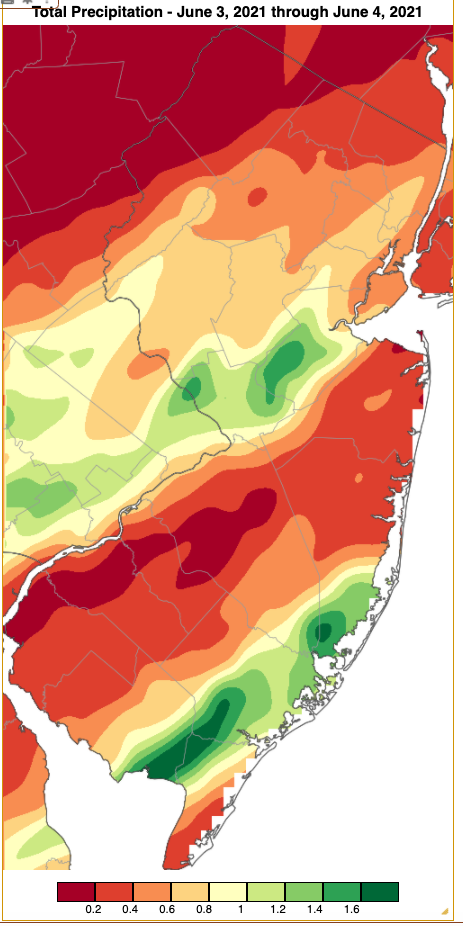 Figure 5. Rainfall from approximately 7 AM on June 2nd to 7 AM on June 4th based on a PRISM (Oregon State University) analysis generated using NWS Cooperative and CoCoRaHS observations. Note the scale in inches at the bottom of the figure.

Afternoon and evening thunderstorms on the 8th delivered some quite localized soaking rain to places such as Hammonton (Atlantic), with three stations coming in with 3.56”, 3.02”, and 2.55”, joined by Haworth at 3.35” (including 2.68” in 45 minutes), Raritan (Hunterdon) 3.01”, Franklin Township (Hunterdon) 2.41” and 2.29”, and Pittstown (Hunterdon) 2.51” (Figure 6). Winds brought down trees and wires in a scattering of counties such as Bergen, Gloucester, Atlantic, and Ocean. 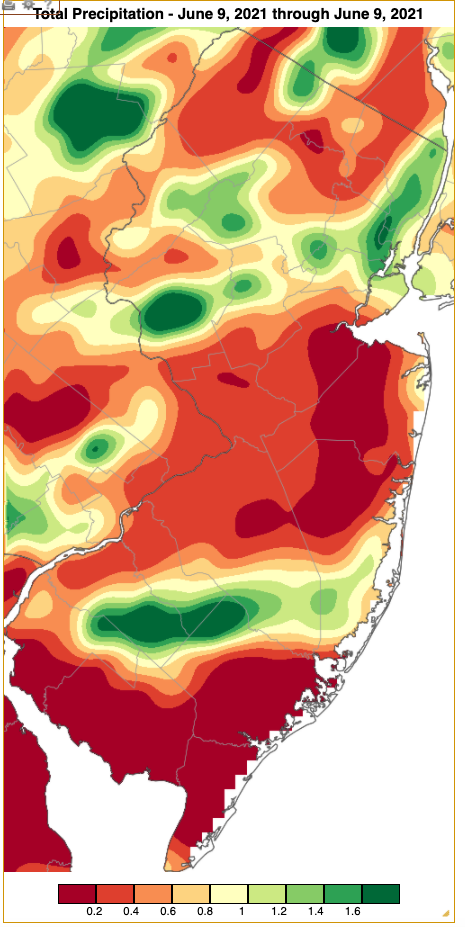 Figure 6. Rainfall from approximately 7 AM on June 8th to 7 AM on June 9th based on a PRISM (Oregon State University) analysis generated using NWS Cooperative and CoCoRaHS observations. Note the scale in inches at the bottom of the figure.

Scattered afternoon and evening thunderstorms on the 9th again brought down trees and powerlines in several southern counties. Most impressive was the 60-mph gust at Lower Alloways Creek Township (Salem) in an isolated severe storm at this upper Delaware Bay location. Rain accompanying this storm accumulated to 3.68”, including 1.07” falling in ten minutes and 3.62” in an hour. Elsewhere, Freehold caught 2.30” and Howell 2.19”. Of 249 CoCoRaHS reports, only 18 received 0.50”–2.13”. Tragically, this storm took the life of a golfer in Burlington County who was struck by lightning. This was the first lightning death in the United States this year and the first in New Jersey since 2012. 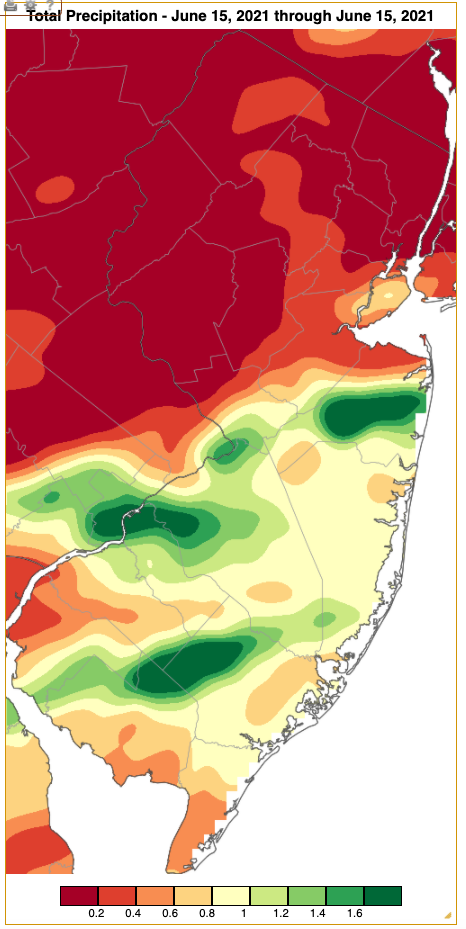 Figure 7. Rainfall from approximately 7 AM on June 14th to 7 AM on June 15th based on a PRISM (Oregon State University) analysis generated using NWS Cooperative and CoCoRaHS observations. Note the scale in inches at the bottom of the figure.

North and central areas caught the most rain in afternoon and evening showers on the 19th, with Rockaway (Morris) receiving 1.12” and both Denville (Morris) and Wayne (Passaic) 1.07”. Gusty evening storms on the 21st deposited 1.10” in Knowlton Township, 0.84” at Sparta (Sussex), and 0.79” in Lower Alloways Creek Township. Peak gusts included 52 mph at the latter site, 47 mph at Fortescue, and 42 mph in Mannington, which brought down trees and powerlines in Salem, Camden, Warren, and Sussex counties.

Thunderstorms brought light to moderate rain during the afternoon of the 22nd. Harvey Cedars saw 1.92”, Long Branch received 1.27” and hail up to 3/8” in diameter, West Creek (Ocean), and Brigantine (Atlantic) 1.07”. Winds gusted to 46 mph at Harvey Cedars and 40 mph in Mullica (Atlantic). The 30th saw very isolated moderate rain totals from evening storms of 1.22” in Maurice River (Cumberland) and four locations caught 0.50”–0.98”. Some trees were reported down in Monmouth and Middlesex counties.

The lowest barometric pressure in June was 29.55”–29.60” on the 21st. The highest pressure was in the 30.35”–30.45” range on the 24th. Other than those reported above, no other wind gusts exceeding 40 mph were observed at NJWxNet stations in June. Fortunately, the High Point Monument anemometer was back in service from the 12th onward. 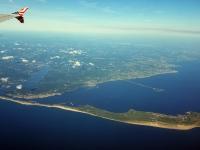