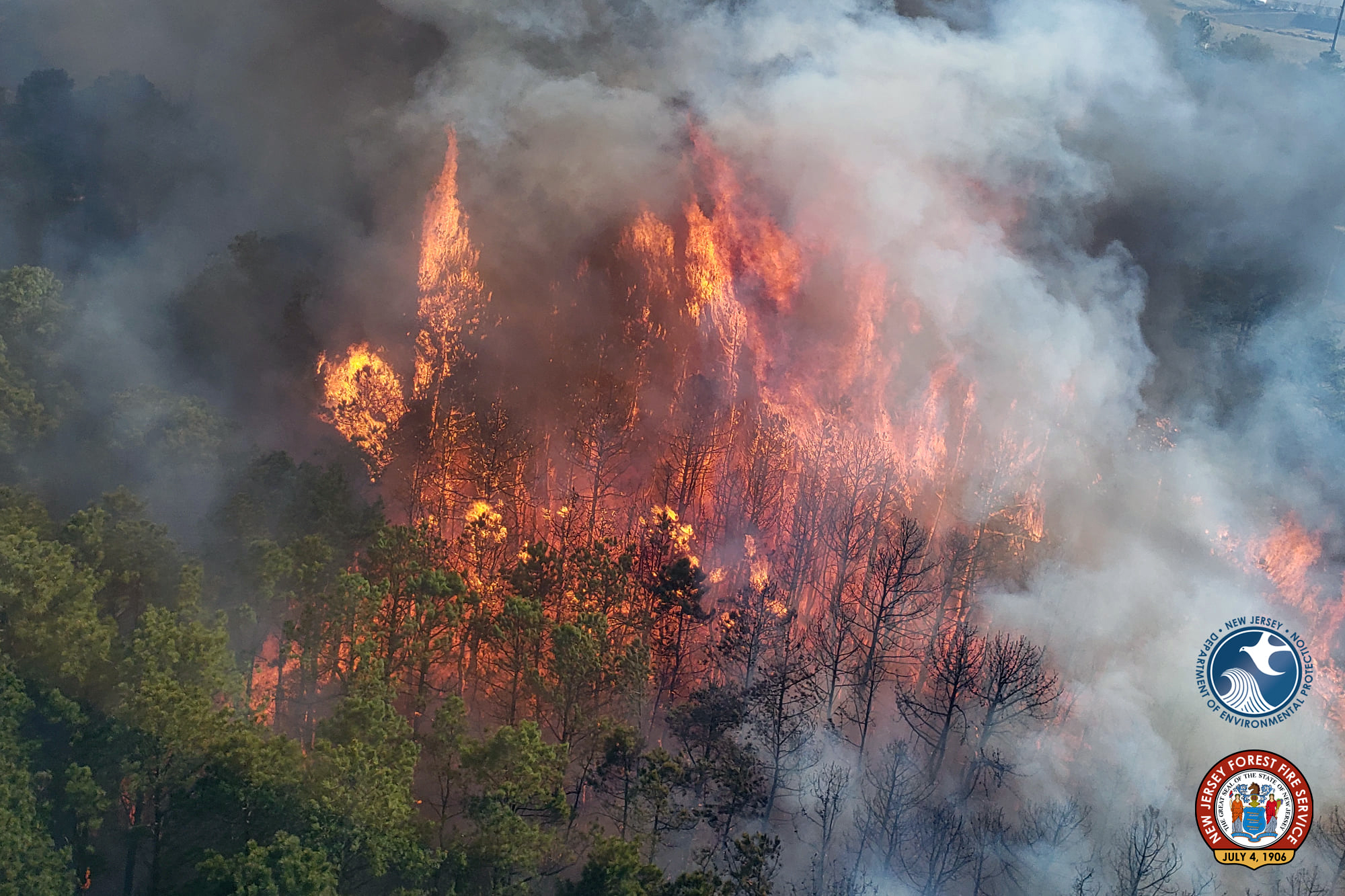 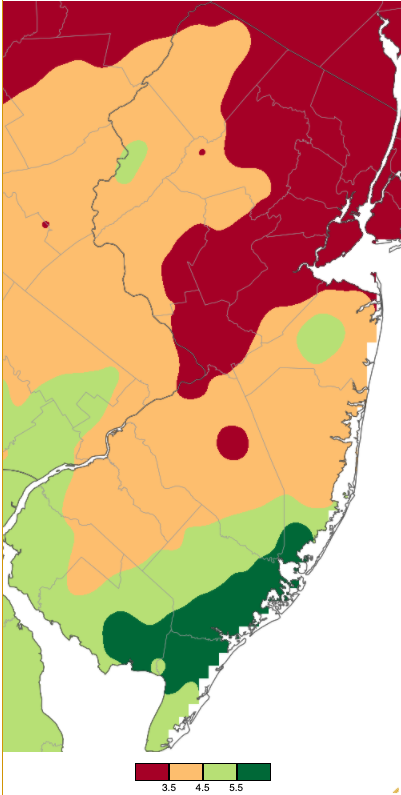 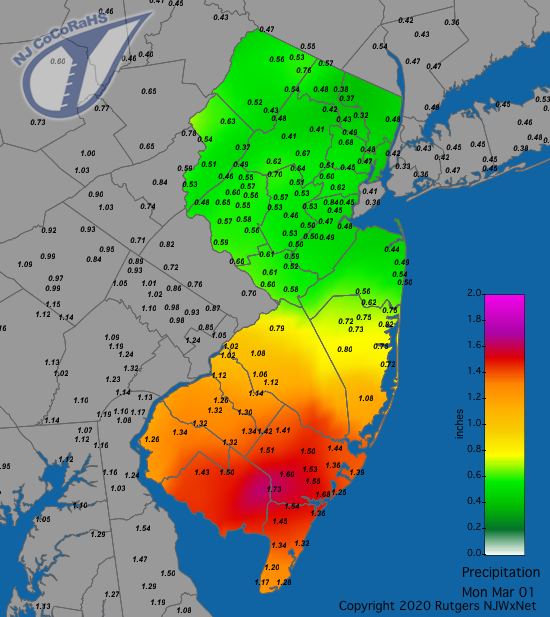 Figure 2. Rainfall from approximately 7 AM on February 28th to 7 AM on March 1st. Reports are from CoCoRaHS observers.

A few snow showers on the 6th whitened the ground with 0.1” measured at both Jefferson Township (Morris) and Sparta (Sussex). The same total in the form of sleet was observed at Bridgewater (Somerset) and Hillsborough (Somerset) on the 16th. These four locations were the only ones reporting measurable frozen precipitation during the month.

Little to no precipitation fell from the 2nd to the 15th, with the resultant dry conditions along with strong winds contributing to the spread of several wildfires on the afternoon of the 14th in Salem and Ocean counties. The latter fire in Brick and Lakewood burned approximately 167 acres, destroyed several commercial buildings, damaged several dozen homes, and led to the closure of a section of the Garden State Parkway. One firefighter suffered cardiac arrest but fortunately survived.

A bit of rain damped the fire danger on the 16th, though no location did better than the 0.25” that fell in Point Pleasant Beach (Ocean). Conditions turned wetter on the 18th with morning rain moving northward through the state, continuing through the afternoon and ending on the heavy side in the south during the evening. Absecon took top honors with 2.00”, followed by Egg Harbor Township’s 1.88”, Linwood 1.85”, Brigantine (Atlantic) 1.75”, and Galloway Township (Atlantic) 1.74”. Of 236 other CoCoRaHS reports, 112 came in at 1.00”–1.65”, with Kearny (Hudson) least at 0.61” (Figure 3). 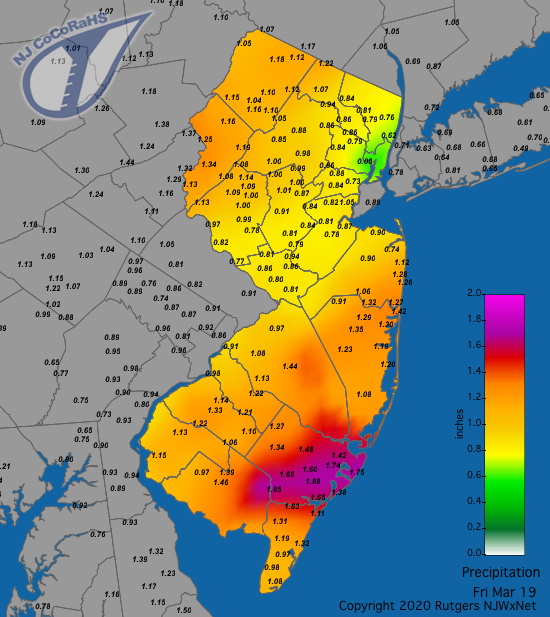 There was enough atmospheric moisture across coastal and portions of inland southern NJ on the 23rd to result in a persistent low clouds and fog that slowly dissipated during the morning. At 9:40 AM, a considerable cover remained that greatly reduced the amount of solar radiation measured at a number of locations (Figure 4). 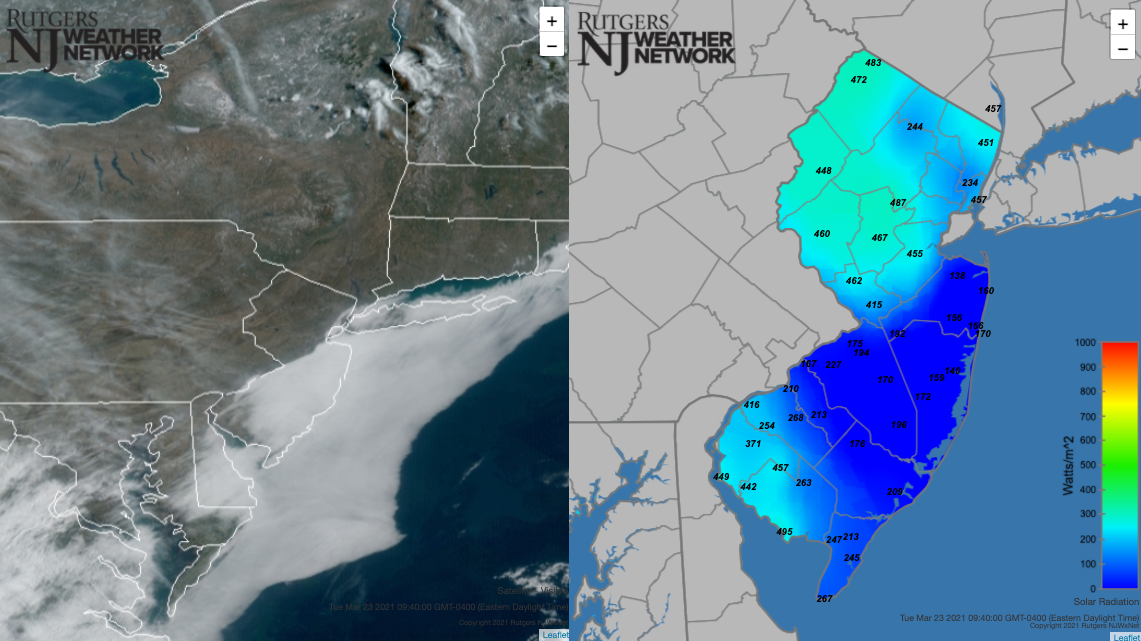 Figure 4. South Jersey fog at 9:40 AM on March 23rd as seen in a NOAA visible satellite image (left) and an NJWxNet solar radiation maps (right). 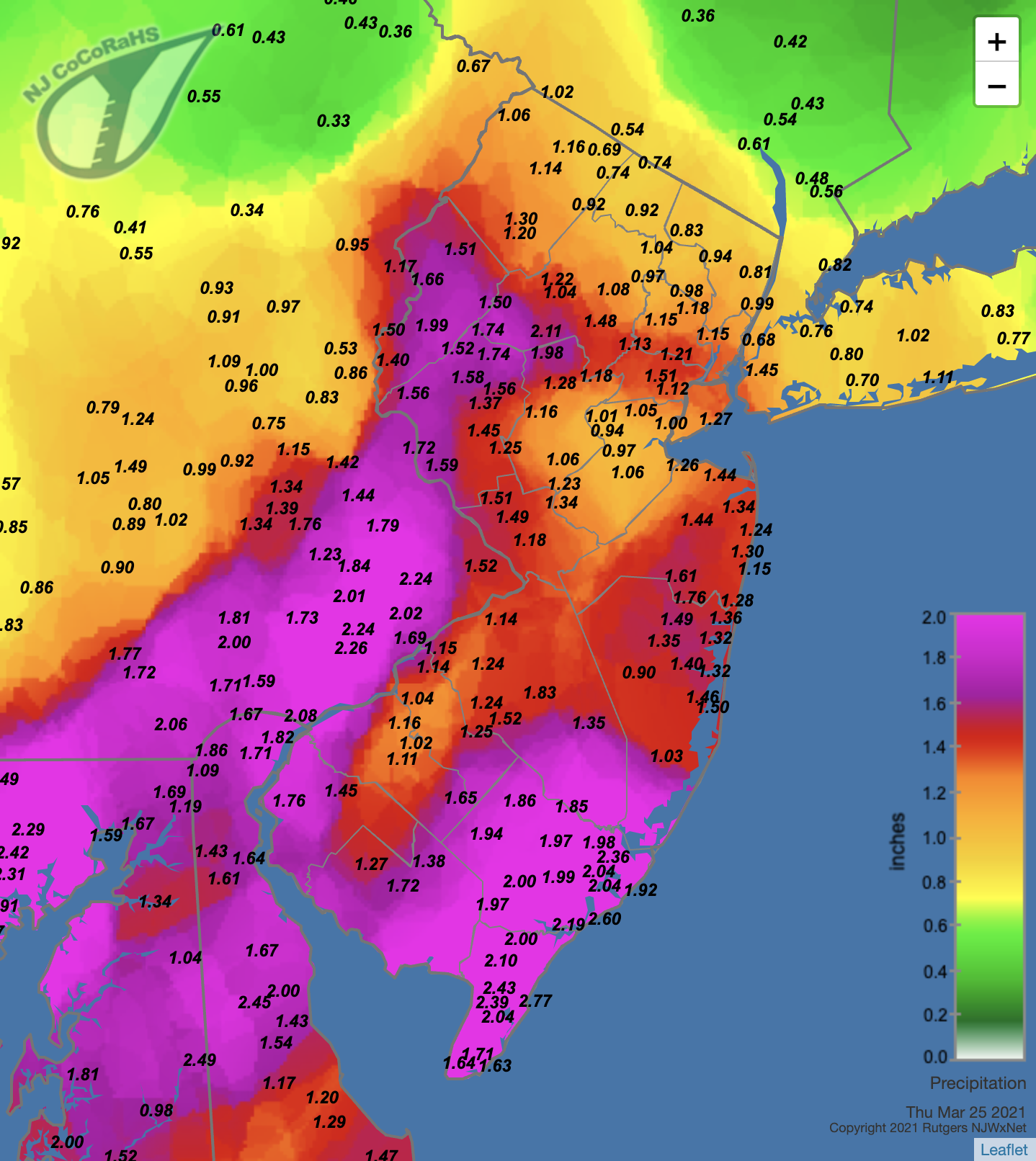 Finally, as has been the case on the last day of the previous four months, precipitation fell on the last day of March after the standard CoCoRaHS and most NWS Cooperative station morning observation times. Thus, the post-observation rain that fell, which continued into the morning of April 1st, counts toward April totals. More will be said about this event in the April report but for now suffice it to say that Medford Lakes and Southampton Township, each in Burlington County, caught the most rain, with 1.82” and 1.72”, respectively.

The final week of March began with HPM gusting to 59 mph, Lyndhurst (Bergen) 51 mph, Seaside Heights 50 mph, 13 stations from 45–49 mph, and 11 from 40–44 mph on the 26th (Figure 6). These “blow torch” southerly winds brought record breaking warmth to parts of NJ (see below for more). HPM reached 42 mph on the 27th. Cream Ridge (Monmouth) topped the list on the 28th, followed by Logan Township (Gloucester) 52 mph, Lower Alloways Creek Township 51 mph, and 15 stations from 40–49 mph. The winds on the 28th did the most damage of all during the month, with many trees and wires down in the central half of the state. A non-NJWxNet gust of 70 mph was observed at the joint MDL Base in Burlington County. 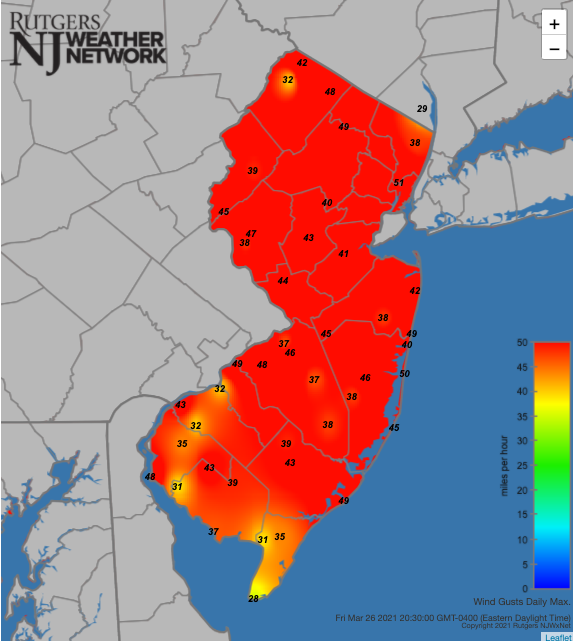 The morning of the 22nd provided an excellent example of a temperature inversion across NJ. As seen in Figure 7, the low-lying stations away from the coast were in the 20°s, and as low as 21° at Walpack. Meanwhile, higher elevations only cooled into the mid 30°s to low 40°s, including a 42° low atop Mountain Creek in Vernon Township. Also seen was the moderating influence of adjacent waters, with coastal stations in the upper 30s to low 40°s. Once the inversion broke, temperatures rose quickly, especially at Walpack where the afternoon maximum of 67° made it the warmest spot in the state. 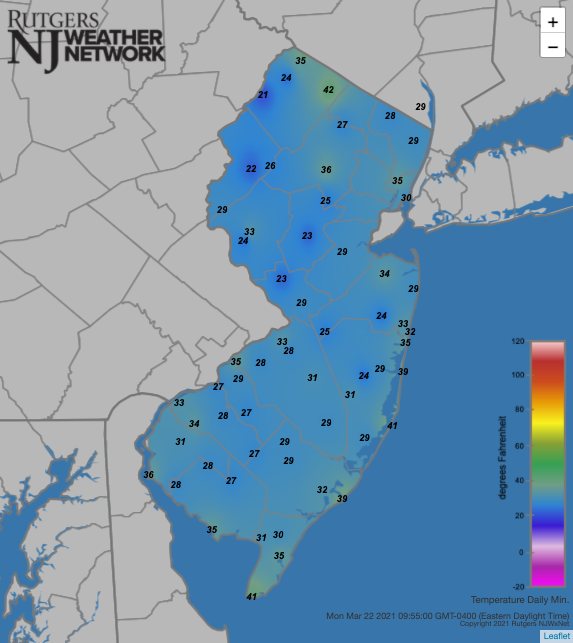 Nine of the final eleven days of the month saw the thermometer exceed 60°. Stewartsville (Warren) reached 67° on the 21st. The aforementioned 67° state maximum and 46° diurnal range at Walpack came next on the 22nd. It is also interesting to note that this day only saw a 9° diurnal range at coastal Seaside Heights, with a 48° maximum and 39° minimum. West Deptford reached 70° on the 23rd with 36 stations from 65°–69°. The Highlands region Charlotteburg (Passaic) station was tops at 72° on the 25th. 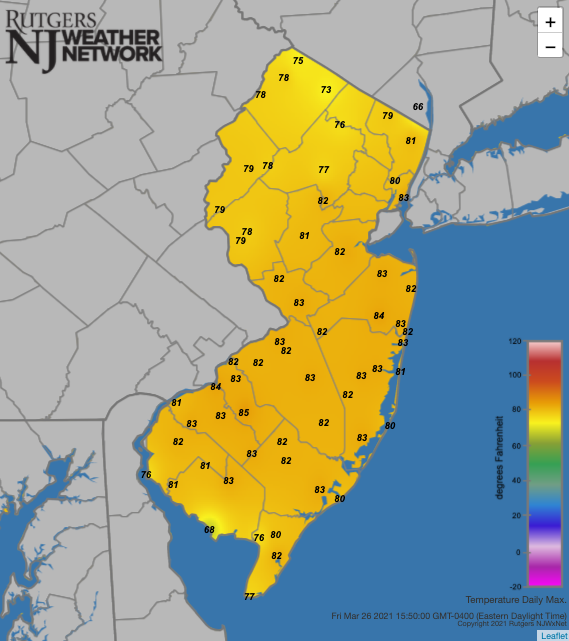 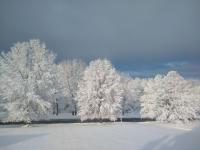 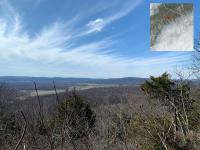