A Rather Quiet End to the Year: December 2016 Recap and Annual Summary, including the Top 10 Events of 2016 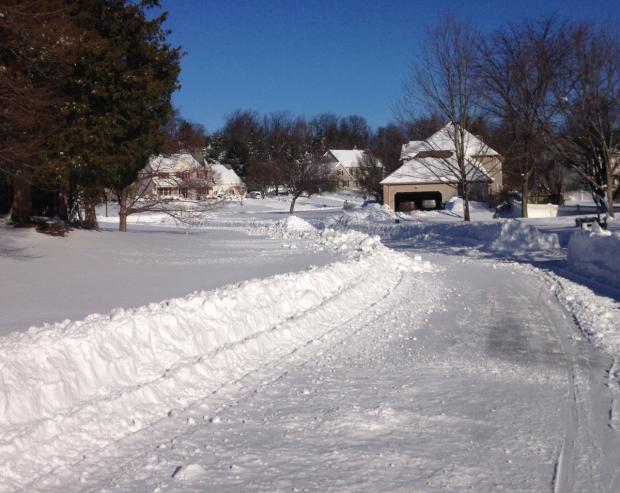 The atmosphere was in a progressive mode throughout December, which explains why no particular weather feature lingered in NJ or elsewhere across North America for too long. The seemingly day-to-day changes resulted in the statewide mean temperature of 36.4° being just 1.2° above the 1981–2010 normal. This ranks as the 28th mildest December since statewide records commenced in 1895, a far cry from last year’s record mild conditions. Despite there being seven precipitation events, one of which was mainly a carry over from November 30th, the rapid movement of these systems meant that none deposited prodigious totals in NJ. Thus 3.37” fell, which is 0.48” below average. This ranks as the 55th driest December. Monthly statewide snowfall averaged 2.0”. This is 2.1” below the 1981–2010 average and ranks 45th least snowy. The northern seven counties averaged 5.5”, the central six counties averaged 1.8”, and the eight southern counties 0.2”, all below average.

There were 14 December days with minimum temperatures at one or more NJWxNet station in the teens or colder. Of these, eight saw a station get to 14° or lower. The first of these was on the 10th, with Walpack (Sussex County) dropping to 10° and Pequest (Warren) to 14°. The following day, Walpack reached 8° and Pequest again 14°. High Point Monument (Sussex) saw a low of 9° and a high of 21° on the 15th, when three south coastal stations maxed at 44°. The 16th found High Point (Sussex) down to 3° and the nearby Monument station and Walpack 5°. West Cape May (Cape May) had the “mildest” minimum at 20°. This was the first day of the season where all NJWxNet stations remained below freezing all day, the Monument only reaching 19° and West Cape May 32°. High Point Monument dropped to 14° on the 17th and Walpack 6° on the 19th. The 20th was the coldest December morning, with Walpack at 0°, Pequest 2°, Hope (Warren) 4°, and 11 stations between 5°–9°. Walpack was 11° on the 21st.

December precipitation totals for most NWS Cooperative and NJ CoCoRaHS stations included rain that fell after standard morning observation times on November 30th. This event was discussed in last month’s report, however, the December totals include the general 1.00”–1.50” in the north and 0.30”–1.00” in the south station measurements that were reported on the 1st. Peapack-Gladstone (Somerset) took top honors for the month with 4.72”, followed by Chatham (Morris) 4.71”, Flemington (Hunterdon) 4.68”, and Hopewell and Hopewell Township in Mercer County with 4.55” and 4.57”, respectively. On the low end, Winslow Township (Camden) received just 2.69” for the month, followed by Sea Isle City (Cape May) with 2.83”, Tabernacle (Burlington) 2.85”, and in Gloucester County, Monroe Township 2.91” and Pitman 2.97”. Aside from the inch plus totals on the 1st, only two other December events dropped as much as an inch somewhere in the state.

December snowfall added up to 16.7” at the High Point Ranger Station (Sussex) and 15.6” and 10.1” at two Wantage (Sussex) locations, 14.0” at Montague (Sussex), 7.5” in Randolph Township (Morris), 7.0” at Hardyston (Sussex), and 6.5” in Jefferson Township (Morris). There were five events where 2.0” or more fell in one or more locations. Snowfall thus far this season at High Point (25.2”) and Wantage (20.1”) exceeds totals for last year’s entire snow season (24.5” and 19.5”, respectively). It is worth noting that the combination of the far northwest corner of the state missing the majority of the January 23rd blizzard and the absence of many minor to moderate events such as have been seen already this season contributed to this most often snowiest area of the state being the least snowy last season.

A mixed rain and snow event on the morning of the 5th brought 0.10”–0.30” to most of NJ. A bit more fell in Cape May County, where Lower Township received 0.37”, North Wildwood 0.36”, and three other communities 0.33”. Up north, some stations in seven counties received measureable snow, the most being 2.1” and 1.8” at two Blairstown (Warren) sites and 2.0” in Liberty Township (Warren). A more significant storm followed from the late afternoon of the 6th to the predawn hours of the 7th. Again, Cape May County won in the precipitation department with 1.43” at Wildwood Crest, Sea Isle City and Middle Township each with 1.20”, and 1.08” in North Wildwood. Central and southern areas mainly received 0.50”–0.75”, while totals near 0.50” were common in the north. Snow fell, mainly at higher elevations, in five northern counties. Top totals included 3.8” at High Point, an elevation-induced range of 0.6” to 3.3” in Wantage, and 2.3” at Highland Lakes (Sussex).

Rain and some snow fell from late on the 11th throughout much of the morning of the 12th. Hopewell Township saw 0.77” of liquid, Robbinsville (Mercer) 0.74”, and Lebanon and Lambertville, both in Hunterdon County, received 0.72”. It was this west central region that caught the most, with 0.25”–0.50” more common elsewhere in northern and central sections and 0.25” in much of the south. Snowfall was more widespread than the two earlier events, with 11 counties having locations with measureable snow. Top totals included 3.2” and 2.2” at three Wantage sites, 3.1” in Montague, and 2.3” in Highland Lakes.

The largest storm of December arrived in the predawn of the 17th, lasting through the midday hours. As much as 1.22” of rain fell in Woodbine, 1.05” at both Upper Deerfield (Cumberland) and Stafford Township (Ocean), and 1.04” in Linwood (Atlantic) and Upper Township (Cape May). Overall, 0.50”–1.00” fell statewide. This includes rain and melted snow, as only Salem and Cumberland counties failed to have at least one station with measureable snow. Some of the more notable snowfall totals included West Milford (Passaic) with 4.1”, Vernon Township (Sussex) 4.0”, Jefferson Township 4.0”, Ramsey (Bergen) 3.8”, Tewksbury (Hunterdon) 3.5”, and Cedar Grove and Newark in Essex County 3.0”.

A predawn to early afternoon event on Christmas Eve was accompanied by mild temperatures, making snowfall out of the question. Instead, Jackson (Ocean) caught 0.75” of rain, Berlin (Camden) 0.68”, and Peapack-Gladstone 0.63”. Commonly, 0.30”–0.50” fell in southern and central regions, with closer to 0.25” in the north. Thus come the morning of the 25th, only NJ lands above 1000 feet had an inch or more of snow cover over at least 50% of the ground, thereby qualifying as a white Christmas.

Another modest predawn to afternoon event on the 29th completed the precipitation story for 2016. Rain, some of it freezing for a time in some northern and central spots, fell across most of NJ, while wet snow accumulated at higher locales. Morris Township (Morris) caught 0.48” of rain and melted snow, with Blairstown picking up 0.46”, and Belmar (Monmouth) and River Vale (Bergen) each with 0.43”. Statewide, most locations saw 0.20”–0.40”. Measureable snow fell in four counties, topped by 4.4” in Montague, 3.0” at High Point, 2.9” and 2.5” in Wantage, and 2.7” at Blairstown. An early evening thunderstorm, accompanied by pea-size hail in Estell Manor, zipped across a swath of south Jersey on the 29th and some generally light snow squalls deposited a few tenths of snow across portions of north Jersey during the 30th into the early hours of the 31st to complete this active episode.

Annual overview, including the ONJSC’s Top 10 NJ Weather and Climate Events of 2016

The majority of this annual review focuses on the eighth annual top 10 list. Before getting to that, a brief recap of annual temperature and precipitation is in order. The statewide annual temperature of 55.0° was 2.1° above average (3.3° above the 1895–2016 average). This ranks as the 3rd warmest year on record (2015 was 11th warmest; top 10 warmest listed in Table 1). Notice that all of the top 10 years have been since 1990. 14 of the top 20 warmest years over a 122-year period of record have occurred since 1998. More interesting 2016 thermal rankings are found under #2 on the top 10 list below.

Annual precipitation (rain and melted frozen precipitation) averaged 40.18”. This was 6.18” below average, ranking 27th driest. While all but the extreme southern portion of the state was below average, it was much more notable in the north. The National Centers for Environmental Information’s northern NJ climate division (all counties north of and including Hunterdon, Somerset, and Union) averaged 38.30”, which is 10.33” below average and ranks as the 10th driest (Table 2).

Table 2. The 10 driest years in the northern division of New Jersey since 1895.

The southern division (includes all but extreme coastal Atlantic south of and including Mercer, Middlesex, and Monmouth counties) averaged 41.13” for the year, which is 3.92” below average and ranks 42nd driest of the past 122 years.

Listed below is the Office of the NJ State Climatologist's ranking of the top 10 weather and climate events of 2016. More about each event can be found in the monthly narratives posted on njclimate.org. You might be tempted to rearrange the rankings, particularly as some of the events down the list may have affected you more than others ranked higher. Or perhaps you best recall one that didn't make the list. That's the enjoyment (and frustration!) of lists. Unless stated otherwise, observations are based on an average of several dozen stations. The period of record for monthly and annual departures is 1981–2010; while for extremes and rankings it is from 1895–present. 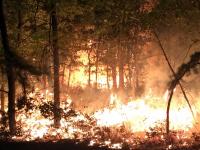 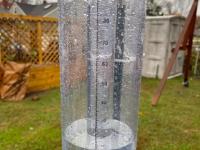 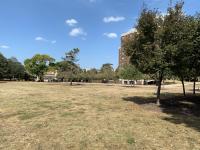 3 mph from the WSW