The following report was written by Hans Moeller, a Chatham High School Senior, based on research performed during 1-month internship at the Office of the NJ State Climatologist

This past winter, snow covered the ground in northern and central New Jersey from the last week of January through mid-March. This long duration of snow cover was accompanied by colder-than-average conditions. This got me wondering whether there is a strong relationship between the two variables. We hypothesize that there is an inverse relationship between temperature and number of days of snow cover during New Jersey winters.

I chose to test this hypothesis using daily data from the National Weather Service Cooperative Weather Station in New Brunswick, NJ. Data were retrieved from the SC ACIS 2 website maintained at the Northeast Regional Climate Center and exported into an Excel file for analysis. From daily observations of maximum and minimum temperature, a seasonal mean temperature was computed for December through February each winter from 1914 – 2015. An early-morning observation of snow on the ground is made daily at the station. For this study, the number of days with the depth exceeding 1”, 2”, and 4” were computed for December – February. The number of days with snow above these different thresholds were plotted against temperature to facilitate analysis.

Whether considering snow depths of 1 inch, 2 inches, or 4 inches (Figures 1-3, respectively), a relationship favorable to my hypothesis was noted. As temperature decreased there were more days of snow on the ground. The graph that showed the best relationship was at 2 inches. It may be that the 1-inch relationship is not as notable because various observers over the years may interpret a 1” cover differently than others. Officially, the ground is considered covered if more than 50% of the area surrounding the common observation point is snow covered. The average depth of the covered region is averaged and then weighted against the fraction that is snow free. One can imagine how this can be interpreted differently amongst observers. It stands to reason that more of the ground is covered when the average depth is greater, making for more consistent observations amongst observers. Thus perhaps why the 2” relationship is stronger than 1”. 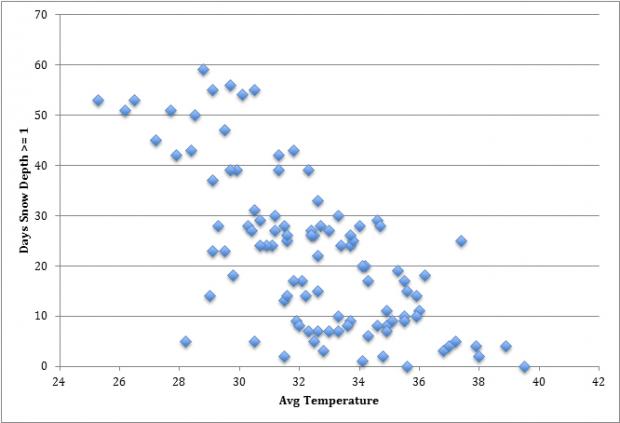 Figure 1. Days at New Brunswick with snow cover of one inch or more in a given season between December 1 and February 28 and average surface air temperature during that period. Data extend from 1914 to 2015. 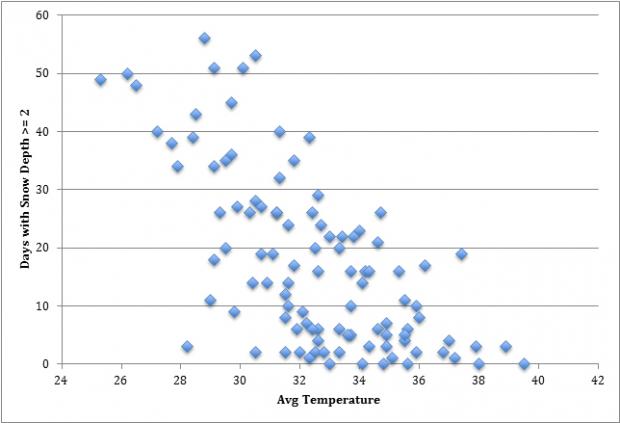 Figure 2. Days at New Brunswick with snow cover of two inches or more in a given season between December 1 and February 28 and average surface air temperature during that period. Data extend from 1914 to 2015." 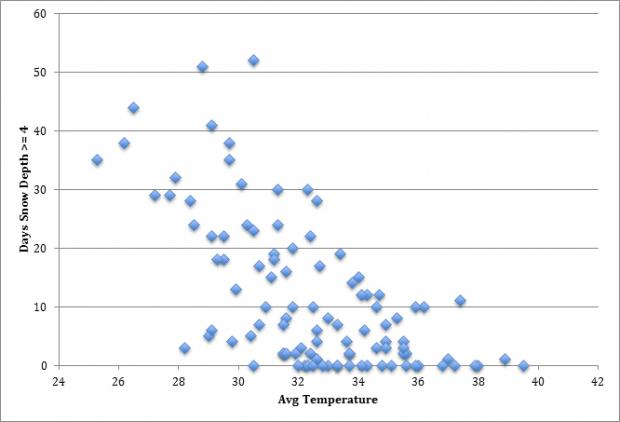 Figure 3. Days at New Brunswick with snow cover of four inches or more in a given season between December 1 and February 28 and average surface air temperature during that period. Data extend from 1914 to 2015.

The 4” relationship is not as strong as at 2”. This is likely for two reasons. First, there are a number of years with few or no days having a 4” or greater snow depth. In fact, one year had a mean temperature below freezing and not a single day with 4” or more on the ground. Only six years had no days with a depth of 2” or greater, and all of them averaged 33 degrees F or higher. Secondly, there may be cold winters with the average temperature below freezing but simply not enough snowfall to maintain a 4” plus cover, while a 2” depth is easier to sustain.

Another result of note is associated with the 29 degree seasonal temperature average. With average temperatures near or below that mark it is rare to find a year with limited snow cover durations at the 1” (40 days), 2” (30 days), or 4” (20 days) level. This suggests that in central New Jersey and likely elsewhere in the state that duration of snow cover is rather sensitive to relatively small changes in mean winter temperature.

By gathering data for the number of days with snow depth equal to or exceeding 1, 2, or 4 inch thresholds and mean winter temperatures I was able to conduct annual analyses of snow cover versus temperature for the past 102 winters in New Brunswick, NJ. Results substantiated the hypothesis of an inverse relationship between snow duration and temperature for each depth category. While this result was not surprising, it demonstrated the sensitivity of this relationship to temperature, especially since winter temperatures in New Jersey are often quite close to the freezing point. Thus relatively minor departures of temperature from mean conditions can make for a winter with an excessive number of days with snow cover or next to none at all.

Future research on this topic should examine other factors that may affect snow cover such as snowfall that year, or even total precipitation (rainfall included). These variables may prove to be just as crucial as temperature to the number of days of snow cover, and perhaps in some cases more so. It would also be informative to look into years where there was little to no snow cover, particularly as New Jersey’s climate continues to warm. To date, there has been no trend toward a shorter snow-cover duration at any of the three thresholds examined. However, given that future winter temperatures are likely to more frequently average well above the freezing mark, such an analysis could show what lies in store in the snow cover department. Such information will be useful to those interested in snow conditions, including snow removal companies, state and municipal road departments, those involved in the business and enjoyment of winter snow recreation, and hydrologists.