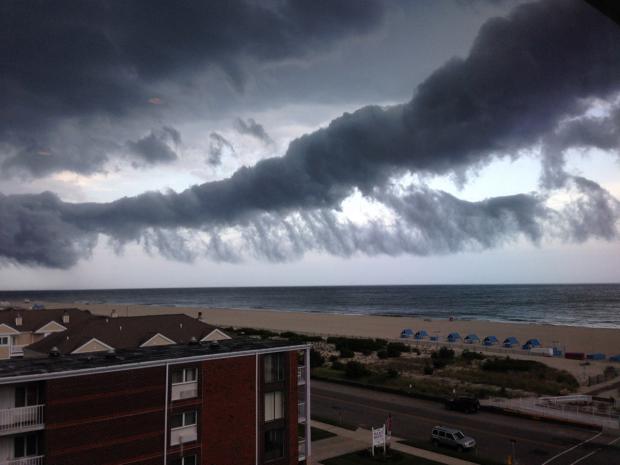 Roll cloud ahead of squall line in Cape May on the evening of June 23rd, where climatologists from 40 states were gathered for the 40th Annual Meeting of the American Association of State Climatologists. Photo by Missy Holzer.

Toward the end of May, the threat of a significant drought loomed over the Garden State, as May proved to be the 3rd driest on record. Crops were in bad shape or not growing at all, and reservoir levels were declining at a faster than seasonal rate. However, New Jersey had yet to reach the point where average and timely rainfall could not remedy the situation. Not only was this prescription filled, it was done in abundance. June rainfall averaged 8.21" across NJ. This was 4.19" above the 1981-2010 normal and ranked 4th wettest since 1895 (Table 1). It joined four other Junes in the past 13 years to rank in the top eight over this 121-year period. As explained in last month's report, the rains that fell during the daytime and evening hours of May 31st factored into the June total, much as the localized afternoon and evening rains on June 30th (discussed below) will count toward the July total.

It did not take long for rain to resume following the May 31st/early June 1st deluge. Later on the 1st through the early hours of the 3rd a statewide soaking exceeded 1.00" at 142 of the 219 reporting CoCoRaHS stations. The heaviest rain fell in the southern third of the state. Fairfield Township (Cumberland County) caught 4.83", Pittsgrove (Salem) 4.68", and Buena Vista (Atlantic) 4.51". Elsewhere, there was a localized heavy total in the Bridgewater Township (Somerset) 2.44" and Somerville (Somerset) 2.47" area.

Ten more episodes where at least an inch was deposited somewhere in NJ followed in June. Next up were morning storms on the 5th that were heaviest in the southwest (Pennsville [Salem] 1.25") and Morris County (Randolph 1.46" and 1.58"; Mendham 1.01"). Thunderstorms during the morning and afternoon of the 6th brought heavy rain to southern and central Cape May County, but little to none elsewhere in NJ. Wildwood Crest saw 2.18", Middle Township 2.00", and North Wildwood 1.70". An evening squall line on the 8th hit the southwest with close to 2" of rain and totals of an inch running up the Delaware Valley to northwest NJ. Coastal areas did not see much rain. Clayton (Gloucester) received 2.10", Winslow Township (Cumberland) 1.93", and Monroe Township (Gloucester) 1.90". While at most only 0.51" of rain fell at Mendham on the evening of the 12th, a fast hitting storm brought down some trees and power lines in Sussex and Warren counties.

Evening storms on the 14th deposited heavy rain across north central NJ from Warren and Hunterdon east to Hudson and Union. Two stations in Flemington (Hunterdon) received 1.81" and 1.75", while three in Hillsborough (Somerset) picked up 1.68", 1.54", and 1.31". Some 61 CoCoRaHS stations had between 1.00"–1.81". The next afternoon and evening, storms deposited pockets of heavy rain in the northeast, northwest, and northern coast. Among the heftier totals were Little Falls (Passaic) 2.36", Kenilworth (Union) 1.70", Cranford (Union) 1.56", Kearny (Hudson) 1.44", and Florham Park (Morris) 1.44". Continuing the showery streak, the afternoon of the 16th brought storms to the Atlantic/Cumberland and Bergen regions. Estell Manor (Atlantic) received 1.10" and there was some damage to trees and wires in the area. Glen Rock (Bergen) caught 0.89". Off and on light to moderate rain followed from the evening of the 17th through the pre-dawn hours of the 19th in the southern third of the state. Pennsville picked up 1.08", while little to no rain fell to the north.

The remnants of Tropical Storm Bill, which days earlier made landfall along the Texas coast, provided some pockets of soaking rain to NJ from the evening of the 20th into the morning of the 21st, followed by some afternoon rain in the north. All told, Linwood (Atlantic) caught 2.33", Ocean City (Cape May) 2.15", Liberty Township (Warren) 1.81", and 31 other stations between 1.00" and 1.81". Elsewhere, only 0.25"–0.50" fell, despite forecasts of more widespread downpours. This storm track was a common one during June, as parcels of moisture rotated clockwise around the periphery of a high-pressure system that was situated over the Southeast US. This differed from May, when high pressure commonly parked over the Mid Atlantic, with its subsiding air inhibiting rainfall.

The merry go round of moisture continued on the 23rd, when one of the hottest days of June helped to spawn a severe squall line. This blasted through a swath of southern NJ from Camden to Long Beach Island during the early evening. Straight-line winds and likely several microbursts (a concentrated area of very strong straight line winds) resulted in numerous trees, branches, wires, and fences being blown down. NJWxNet stations reported gusts of 71 mph at Hammonton (Atlantic), Mullica (Atlantic) 69 mph, Harvey Cedars (Ocean) 68 mph, Oswego Lake (Burlington) 65 mph, Sewell (Gloucester) 53 mph, and Upper Deerfield 50 mph. Six other stations gusted in the 40–49 mph range and seven between 30–39 mph. Downburst winds likely exceeded 80 mph in some areas. The storm resulted in several hundred thousand customers losing power, mostly in the southern part of the state, and communication networks were out for an extended period. This was the worst south Jersey damage since the June 29–30, 2012, derecho and largest power outage in NJ since Sandy in October 2012. Fortunately, there were no deaths attributed to this storm. Rainfall was a secondary part of this event but still totaled up to 2.21" in Blairstown (Warren), 2.20" in Upper Deerfield, and 1.25" in Dennis Township (Cape May). Only the southern third and northwest corner of the state received more than 0.50".

The southeast had a bout of rain from the evening of the 25th into the morning of the 26th. Estell Manor picked up 1.19", Middle Township 1.08", and Cape May (Cape May) 1.05". The southwest had about 0.25", with little to no rain elsewhere. The morning of the 27th into the morning of the 28th brought a period of damp, dreary, and cool conditions throughout the state. Heavy rain invaded NJ later on the 27th, resulting in some flash flooding of roads and streams in a zone not too dissimilar from that impacted by the strongest winds on the 23rd. Three inch plus rains fell near the Monmouth/Ocean border and in an area encompassing eastern Camden and Gloucester and western Atlantic counties. At least two inches fell in most of the remainder of southern NJ, with 1–2" further north. The greatest totals, all in Ocean County, included Brick Township with reports of 4.72", 3.62", 3.61" and 3.56", Little Egg Harbor 3.73", Pine Beach 3.70", and Toms River (Ocean) 3.68". Some 45 CoCoRaHS stations received from 2.00"–4.72", 140 caught from 1.00"–1.99", and only 10 had less, ranging from 0.74" in Denville (Morris) to 0.99" in Bloomingdale (Passaic).

A locally severe thunderstorm, with a likely microburst, hit the Hackettstown area of Warren County on the afternoon of the 30th. Hail about 0.25" in diameter fell and numerous trees and wires went down, resulting in power outages. A small area of heavy rain totaled as much as 1.74" in Mansfield Township and 1.71" at Pequest. Later that evening, heavy rain resulted in some flash flooding in western Sussex County, where 2.45" fell at Montague.

Eight June afternoons saw temperatures peak at 90° or higher at one or more of the 55 NJWxNet stations. Before starting a listing of these days and temperatures, it is worth reporting that on June 1st the highest reading in NJ was 86° at Greenwich (Cumberland) while the thermometer only made it up to 51° at the High Point and High Point Monument stations in far northern Sussex County. 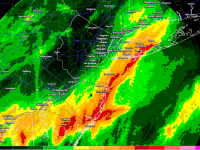