If you have a sense that April was unusually windy, you are certainly not alone. While long-term wind observations are few across the Garden State and those available suffer from inconsistencies in instrumentation and location, seat-of-the-pants judgment tells us that plenty of air raced crossed the state throughout the month. In fact, the wind gusted to 40 mph or higher at one or more NJWxNet station on 12 days. Of those, seven had gusts from 50–59 mph and an impressive four gusted over 60 mph. The highest network gust of 76 mph occurred at Sea Girt (Monmouth County) on the 21st. There were also reports from other seemingly reliable stations of gusts as high as 82 mph at Island Beach State Park (Ocean) on the 13th.

April precipitation achieved a statewide average of 3.92”. This is 0.07” below the 1981–2010 mean, but given the skewness of the distribution of April rainfall over the past 126 years, it ranks as the 45th wettest. Despite Morris County stations having the highest monthly totals, overall, the north part of the state was driest. The mean of 3.66” was 0.54” below normal and is the 59th driest (68th wettest). The south averaged 4.07”, which is 0.21” above normal and is 40th wettest. The narrow coastal region averaged 4.16”, which is 0.33” above normal and ranks 39th wettest.

Traces of snow, sleet, and graupel were observed at a number of locations around NJ in April, though any measurable snowfall was limited to some northern locations, mainly at higher elevations. The statewide average was a trace, closing the books on the 2019–2020 snow season as the 3rd least snowy since 1895 with an average of 4.7”. The north averaged 0.1” in April, with the central and south regions coming in with a trace. The complete seasonal snow summary can be found here.

An interesting temperature factoid finds this April being only 2.6° milder than March. This is the third closest April has come to being cooler than March. Previously, 1946 had a difference of only 2.2° and in 1898 the difference was 2.4°. The largest March to April difference was 23.0° in 1960. The closeness this year was due to a cool April and the 6th mildest March, while 1960 had the second coldest March on record and the 9th mildest April. The long-term average difference between the months is 10.1°, which is the second greatest over the course of the year, only exceeded by the 11.3° difference between September and October, with November to December third largest at 10.0°.

The first week of April found several days with scattered showers generally totaling no more than 0.20” at any particular location on any day. Early morning thunderstorms and showers on the 8th deposited as much as 0.86” in Frenchtown (Hunterdon), Montgomery (Somerset) 0.72”, Princeton (Mercer) 0.70”, and Flemington (Hunterdon) 0.69”. The heaviest totals were found between Interstates 195 and 78, while small hail was reported in Gloucester County. Along Delaware Bay, winds gusted to 43 mph in Lower Alloways Creek Township (LACT; Salem) and 42 mph at Fortescue (Cumberland).

A lightning strike on the 8th ignited a wildfire in the Millville Wildlife Management Area in Downe Township (Cumberland). The fire burned approximately 1500 acres of forest before being fully contained late on the 10th. No injuries or structural damage were reported.

An early-afternoon squall line crossed the state from west to east on the 9th. The rapid advance of the line limited rainfall totals to no more than 0.55” at Brigantine (Atlantic), 0.41” in Linwood (Atlantic), and 0.41” and 0.35” at two locations in Woodbine (Cape May). Pea-size (1/4”) hail was reported in Monmouth County, while the big story was the wind. Gusts of 66 mph were recorded at High Point Monument (HPM; Sussex) and Seaside Heights (Ocean), LACT 63 mph, Harvey Cedars (Ocean) 61 mph, with eight NJWxNet stations gusting between 50–59 mph and 22 from 40–49 mph. Other gust reports included 71 mph at Barnegat Light (Ocean), Linden (Union) 66 mph, and Pomona (Atlantic) 62 mph. Reports of structural damage, toppled trees, and scattered power outages were common around the state.

A blustery 10th saw Jefferson Township pick up 0.5” of early-morning snow with a number of locations in north seeing the ground briefly snow-covered (Figure 1). North and central areas experienced brief squalls of snow or graupel during the daytime hours. Winds continued to howl, gusting to 61 mph at LACT, 59 mph at HPM and Upper Deerfield (Cumberland), 50–58 mph at eight locations, and 40–49 mph at 22 other NJWxNet stations. 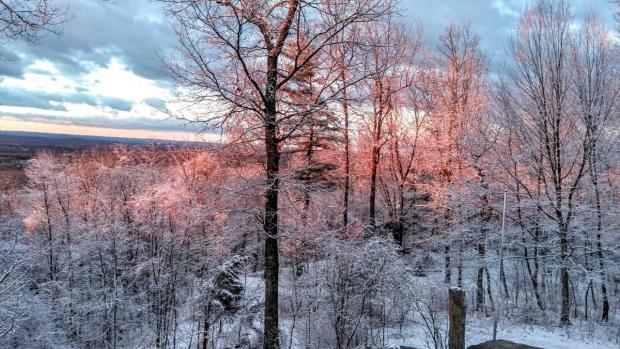 The strongest storm of the month began late on the 12th and continued until the early evening on the 13th. Rainfall totals ran as high as 2.81” and 2.73” at two Randolph (Morris) stations, followed by Bloomingdale 2.72”, Mount Arlington 2.63”, Mine Hill 2.61” and 2.50” (two locations), Rockaway 2.60”, and Roxbury (Morris) 2.58”. The Morris County maximum is seen on the two maps showing CoCoRaHS reports for the 24-hour intervals ending on the mornings of the 13th and 14th (Figure 2). Of the 244 CoCoRaHS stations reporting the event, 55 received from 2.00”–2.82”, 181 between 1.00”–1.99”, with a low total of 0.85” in Fredon (Sussex). A major aspect of this storm was, once again, the wind. What was likely a gravity wave brought strong winds down to the surface from several thousand feet aloft. This resulted in damaging gusts along the south coast that reached 82 mph at Island Beach State Park, 81 mph at Barnegat Light and Mystic Islands (Ocean), Harvey Cedars 67 mph, Atlantic City Marina (Atlantic) 63 mph, Mullica (Atlantic) 62 mph, and Woodbine 61 mph. A dozen other NJWxNet stations reached 50–58 mph and 19 from 40–49 mph (Figure 3). Structural damage, downed trees, and power outages were reported. 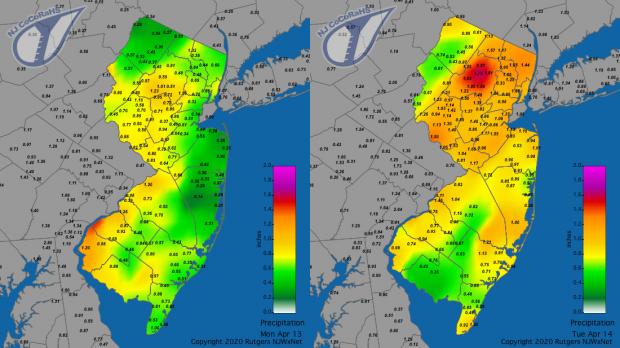 The 16th found snow flurries in the southwest early in the day and in northern and central regions in the early evening. Rain next arrived late during the evening of the 17th, persisting until mid-morning on the 18th. Totals were largest north of Interstate 78, with two West Milford (Passaic) stations at 0.63” and 0.62”, Jefferson Township 0.60”, and Montague (Sussex) 0.59”. Less than 0.25” of rain fell further south. High Point Ranger Station (Sussex) picked up 1.3” of snow, while 1.0” accumulated at an elevation of 1,000’ in Wantage.

Following late-morning showers on the 21st, an early-afternoon squall line raced across NJ, bringing brief heavy rain, reports of rice- to pea-size (1/4”) hail in counties throughout the state, and, again, damaging wind. Princeton and Toms River (Ocean) each reported the most rain with 0.42”, while both Denville (Morris) and Hackettstown (Warren) picked up 0.38”. Most locations caught 0.15”–0.25”. A waterspout in Barnegat Bay traveled east and made landfall in Normandy Beach (Ocean), thus transitioning to a tornado. Rated an EF0, the twister traveled about 0.4 mi before dissipating over the Atlantic Ocean as a waterspout. There were other reports of waterspouts further up the coast. Wind gusts reached 76 mph in Sea Girt (Monmouth), West Cape May (Cape May) 69 mph, Logan Township (Gloucester) 66 mph, and Pomona 60 mph. Four NJWxNet stations gusted between 50–59 mph and 14 from 40–49 mph (Figure 4). Yet again, there was scattered structural damage, trees felled, and power outages. 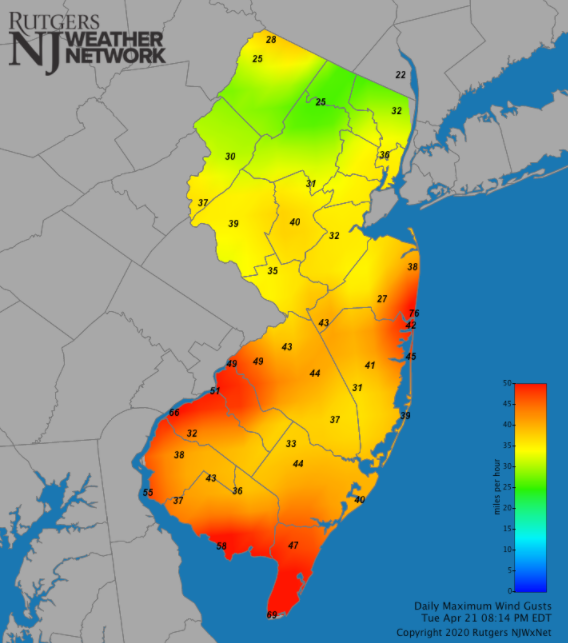 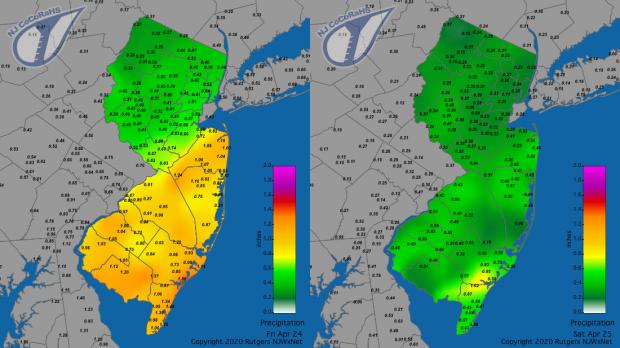 A raw, rather windy 26th brought 0.78” to Rockaway, 0.68” and 0.62” to two West Milford locations, 0.61” to Washington Township (Warren), and 0.56” in Chester (Morris). As happens on occasion, some heavy rain fell on the last day of the month, with the vast majority falling after morning reports were filed by most National Weather Service Cooperative and CoCoRaHS observers. Thus the afternoon and evening rain that fell is counted as a May 1 value at most stations and has not been factored into the monthly station totals listed earlier in this report. Nor are most of these reports included in the monthly statewide totals, though there are a minority of stations that report in the evening or at midnight (e.g., NWS airport stations), causing some minor weight to the statewide totals to come from this event. A full accounting will be found in the May report, but suffice it to say that as much as 2.19” fell in Washington Township (Morris), 2.17” at Oxford (Warren), and 2.15” at Hackettstown, with the northwest coming in well ahead of most other areas. Winds gusted strongly on the 30th, with a 56 mph peak at HPM, Lyndhurst (Bergen) 54 mph, Logan Township 52 mph, and 27 NJWxNet stations between 40–49 mph (Figure 6). 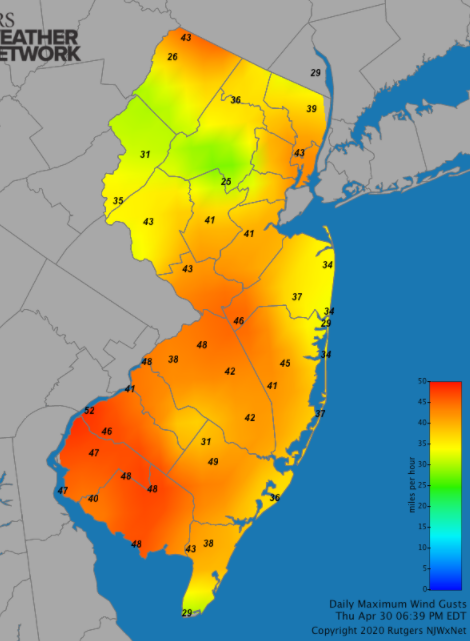 Daily maximum temperatures equaled or exceeded 70° at a number of the 62 NJWxNet stations on seven April days, while on five others, the thermometer reached 68° or 69° at multiple sites. The first 70° day was the 5th with Sewell (Gloucester) up to 72°, while 44 stations were between 65°–69°. The 8th was the warmest day of the month, with the 76° mark reached at Cape May Court House (Cape May), Mansfield (Burlington), Vineland, and Woodbine. Some 34 other stations topped out from 70°–75°, while HPM only made it to 57°. The 9th found Egg Harbor Township (Atlantic) and Woodbine at 73°, 16 other stations from 70°–72°, and again HPM coolest at 49°.

Seven NJWxNet stations failed to record a freezing temperature in April. Four of these locations last reached the freezing mark on March 1st, namely Atlantic City Marina, Harvey Cedars, Seaside Heights, and Lower Alloways Creek Township. These coastal locations were joined by Fortescue (3/8), Pennsauken (Camden; 3/8), and Lyndhurst (3/16). It is quite unusual to have what is likely the last freeze at these stations occur so early in the spring season.

I thought it might be welcome to end this report of rather dismal spring weather over the course of these trying times with a burst of sunshine. The afternoon of the 30th was generally cloudy and damp, but at times the sky brightened a bit. As the map of solar radiation and the accompanying visible satellite image shows, the sun shined brightly for a brief while in the vicinity of Atlantic City (Figure 7). Elsewhere, clouds thinned enough to raise values a bit, though the far north saw thick clouds locked in throughout the day.

Figure 7. Solar radiation at 12:52PM (left) and cloud cover from a visible satellite image at 12:41PM (right) on April 30th. Radiation observations from the NJWxNet and satellite image from NOAA.