The following report was written by Eric Davis, a Chatham High School Senior, based on research performed during 1-month internship at the Office of the NJ State Climatologist

The convention of the weather and climate community has been to calculate the observed daily mean temperature by summing the maximum and minimum instantaneous temperatures during a 24-hour period and dividing by two. However, does this recording method capture and represent the true average temperature over the course of a day? This conventional approach fails to integrate significant behaviors of temperature associated with rapid weather events, frontal passages, sea breezes, and even seasonal temperature variations. It is possible that sampling more frequently and finding a more representative value for daily temperature averages will reveal patterns in which the daily mean temperature skews towards the daily maximum or minimum (i.e., the full-day average temperature is more often closer to the daily maximum or the daily minimum).

In a recent dissertation titled “A Comparison of Daily Temperature Averaging Methodologies: Uncertainties, Spatial Variability, and Societal Implications” (Bernhardt, 2016), Jase Bernhardt examined this topic on a national level using hourly observations from 215 stations at airports across the contiguous United States. Here, we take a look at this by examining averages of daily temperature from four New Jersey locations gathered from instantaneous observations taken as frequently as every two seconds. The four different locations are in northern and coastal New Jersey; one an airport and the others representing a diversity of microclimates across the region (Figure 1). 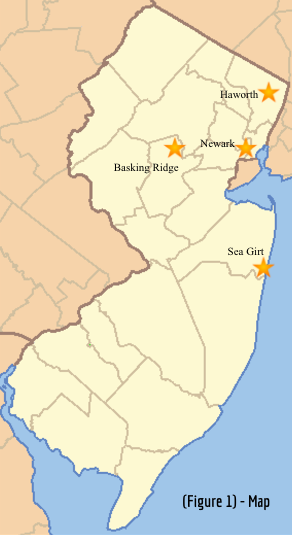 Rather than use only two data points to draw an average daily temperature, as done for over a century, we calculate a representative mean by using readings taken every two seconds for stations located in Haworth (Bergen County), Basking Ridge (Somerset), and Sea Girt (Monmouth). Due to the lack of availability of such frequent data at Newark, a daily average was derived from instantaneous hourly temperature readings. Applying an hourly approach with the other three study stations showed minimal differences between daily means calculated via the two-second and hourly methods, however, we decided to use the highest resolution data available. With these new, more accurate averages, the difference found between the conventional and the higher resolution averages reveal monthly and seasonal behaviors in which temperatures often skew toward the daily maximum or minimum instantaneous temperature. The four stations utilized all have different microclimates, thus were selected to determine if their unique locations might have an impact on daily temperature values computed from frequent sampling that the conventional method does not depict.

Study stations had complete data for 2013–2016. Any day within the observed time frame that had missing data was eliminated from the study; never did the number of missing days amount to 5% of a year’s observations. Haworth is located in suburban Bergen County in a moderate density housing area and in close proximity to a local reservoir and several golf courses. Basking Ridge is a more rural station located in Somerset County and is situated in an ancient lakebed within the Great Swamp and at the headwaters of the Passaic River; low density housing is located nearby. Sea Girt is a coastal station in Monmouth County. The Newark station is located at the international airport, an industrial and heavily trafficked area adjacent to the New Jersey Turnpike and Newark Bay.

For the purpose of this brief study, we calculated monthly differences between daily average temperatures generated from the conventional and more frequent sampling approaches. For each station, plots were made for individual years and four-year monthly averages. Results are summarized below, with examples provided and some speculative remarks made regarding the findings. The plotted mean differences represent the conventional approach minus the more frequent sampling method (see difference plots from each years here).

Looking at a comparison of monthly averages for each study year at Basking Ridge, there is an observable difference between the averaging methods, with a rather pronounced seasonal pattern (Figure 2). Comparing individual years, there is a large gap between the winters of 2015 and 2014 from 2013 and 2016. Perhaps this can be attributed to the fact that the winters of 2014 and 2015 were both colder than normal (the 1981–2010 30-year average), while the winters of 2013 and 2016 were both slightly above average (more information here). These cold winters had average daily temperatures skewed toward the maximum daily temperature. 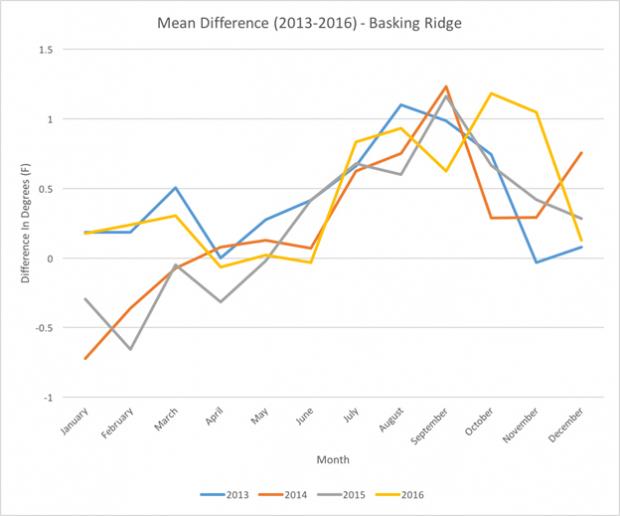 Figure 2. The mean difference of the daily conventional approach minus the more frequent sampling method averaged on a monthly basis at Basking Ridge.

The spring months in Basking Ridge tend to have the smallest difference between the daily averaging methods and, along with summer, the least variation between years. Perhaps this is in part a function of this being a transitional season, with ample amounts of solar radiation influencing the region.

Basking Ridge shows a pronounced difference between averaging methods in the late summer and early autumn months. All years display this pattern of daily temperatures skewed toward the minimum from July through October. Since the station is located in a locally depressed topographic area, it is well known to experience strong cold air drainage during calm, clear nighttime hours. Such conditions are more common in this region at this time of the year, and it seems that the conventional averaging method fails to take this phenomenon into account.

Figure 3 shows the average monthly differences of all four stations across the entire interval of 2013–2016. Results demonstrate that the microclimates of the individual stations have a notable effect on the difference between averaging methods over the course of the year at each station and between locations. 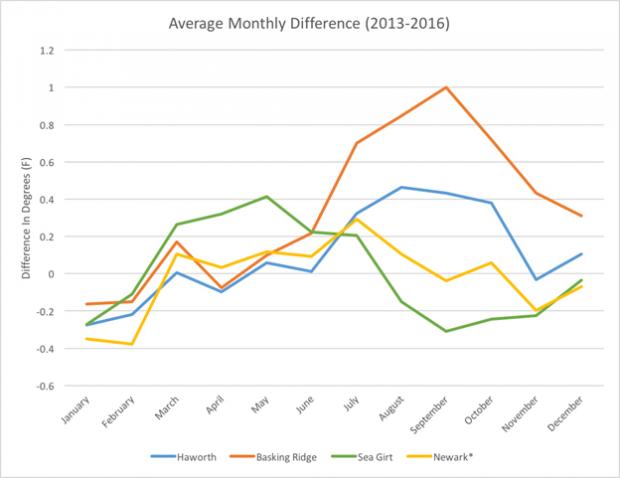 Figure 3. The mean difference of the daily conventional approach minus the more frequent sampling method on a monthly basis for all four stations across all four years.

For instance, during the spring transition season, Sea Girt temperatures over the majority of a typical day are skewed closer toward the minimum temperature. Since it is directly adjacent to the Atlantic Ocean, perhaps the cooling maritime effects, particularly in spring, prevent the area from maintaining a higher temperature for a long period of time. The temperature may rise quickly in the morning but once the heating of land induces rising air, a sea breeze quickly envelopes coastal locations with air moving inland from over the still cool ocean waters.

Another interesting observation is the January–February interval where all four stations show temperatures skewed toward the daily maximum. This “trough” in the annual curves as plotted in Figure 3 is found along with the rather steep transition in and out of it in December and March may be associated with these being the coldest months of the year, but exactly why there is this signal remains unclear. This trough is ubiquitous among all stations, so the microclimates of the stations may not have as large of an impact during the winter, as it appears to be a commonality among all four stations, thus a broad regional explanation is warranted.

The late summer and fall is another fascinating period, as it appears that the differences between stations diverge in different directions. Newark’s difference sits close to zero, as it does during most months, perhaps associated the with the area's urban heat island. This results in the temperature remaining fairly consistent and often symmetrical to the maximum and minimum temperatures over the course of the day due to inability to foster rapid shifts in temperature. Meanwhile, Sea Girt late summer/fall temperatures skew toward the maximum, Haworth skews toward the minimum, and Basking Ridge even more toward the minimum. Perhaps Sea Girt’s pattern can be explained by the coastal region experiencing warmer fall temperatures and less temperature variability due to the proximity to the ocean. In autumn, the ocean is often warmer than the land temperatures (especially at night), keeping the regional air temperature warmer well into the fall. With the absence of the ocean or an urban heat island, Haworth and Basking Ridge both experience a sharp increase in the skewness toward the minimum during this interval, perhaps because the days are growing shorter with fewer hours of sunlight not permitting the temperature to stay high for long periods of time. Additionally, Basking ridge cools dramatically during the night as mentioned earlier, and Haworth’s suburban setting may allow for more cooling than an urban or coastal setting. The late summer and early to mid-fall also tend to have less cloud cover than other months, a condition that favors nighttime cooling in these areas.

Although it may be impossible to pinpoint certain causes of these observed differences from examining just these few years, more research over a longer period of time should provide greater insight into the reasons behind these phenomena. Attention should be paid to:

Practically speaking, a continuation of this study should shed further light on the likely benefits of the higher resolution temperature averaging approach; information that should be valuable to multiple sectors. In terms of energy and utilities, the knowledge of how temperatures typically skew toward either the daily maximum or minimum temperature throughout the day during certain months or seasons could allow utilities to better manage the distribution of resources among different areas depending on the effects of their unique microclimates. The agricultural community could utilize this information in consideration of how they deal with their crops. Whether it be in regards to the planting time or insecticide distribution, the knowledge that this study has revealed could be beneficial to their operations.

In terms of further research, combining our approach with certain patterns could also reveal other components that affect the already observed differences. These may include:

Overall, it is apparent that value is added by using an approach that takes into account more frequent readings in order to calculate average daily temperature over the traditional maximum/minimum method. Continuing this research may also uncover other unexpected patterns that are simply being ignored as a result of the conventional averaging method. We encourage the adoption of this improved method, made all the more possible with regional mesonets currently found in many areas that capture high-resolution temperature observations. To do so will permit the identification of currently unknown nuances in the behavior of the world around us.

3 mph from the NW