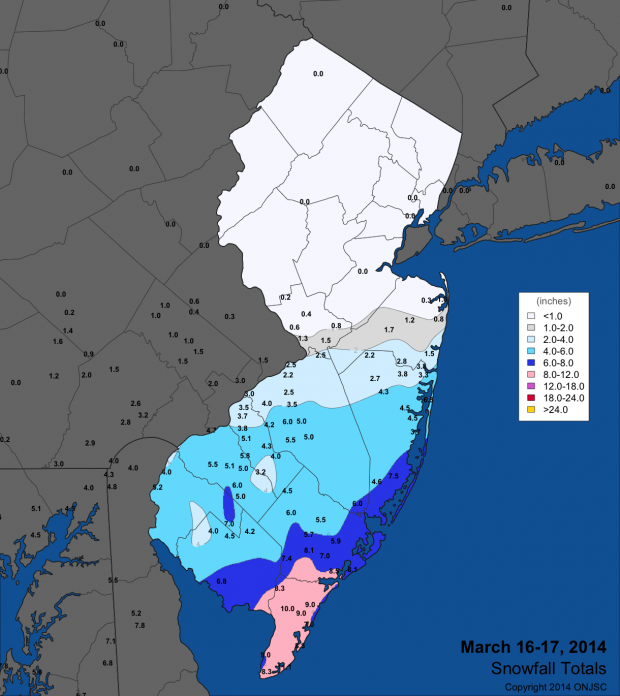 Depending on where you live in New Jersey, this past month could have been extremely winter-like, or on the other hand, extremely not. March marks the beginning of meteorological spring, however the atmosphere had something different in mind. March bought several winter storms to South Jersey, while North and Central Jersey had close to no snowfall. Living in Central Jersey, the beginning to meteorological spring was less than ideal for snow lovers, with cold temperatures and essentially no snow to go along with it. This being said, the southern part of the state (comprised of Burlington, Ocean, Camden, Gloucester, Salem, Cumberland, Atlantic, and Cape May counties) had an atypically snowy March with an average of 11.8 inches of snow, while its neighbors in the central and north had 0.4 and 0.1 inches, respectively. This is not the first time in New Jersey’s weather recording history that this has happened, but it is the most significant difference between the southern, central, and northern parts of the state. This past March has also been the only time on record that Southern New Jersey saw significant snowfall while north of that saw close to no accumulation. Second place goes to March 1914, exactly a century ago, when southern New Jersey saw 25.8 inches while central and northern New Jersey saw 19.5 and 20.1 inches. The average snowfall in Southern Jersey (spanning the past 120 snow seasons) is 3.0 inches for the month of March, while averages for Central and Northern Jersey are 4.9 and 6.1 inches, respectively. Accordingly, all three regions experienced unusual snowfall during March, but in completely different ways.