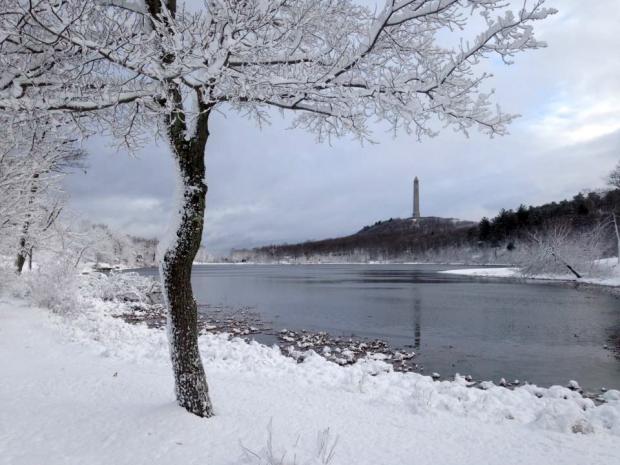 A snowy scene at High Point Monument (Sussex County) on November 20 after a 6.5" snowfall (photo by Shawn Viggiano).

Much like the entire fall season, the transition into the cold half of the year was in no great hurry in November. Leaves dropped from ten days to two weeks later than normal, but eventually by the 28th the temperature fell to the freezing mark at West Cape May (Cape May County) and Newark Airport (Essex), these being the last locations in the state to experience their first freeze. A major exception to the slowly-transitioning pattern was the moderate high-elevation snowfall the weekend before Thanksgiving.

Drought conditions continued to be worrisome across the state, even spreading southwards. However, back-to-back heavy rainfall events on the 29th and 30th provided some replenishment to thirsty soils and began adding water to surface reservoirs across central and northern counties. It will be interesting to see if the atmospheric pattern change that delivered the late-month soakings is fleeting or will be longer lasting. Monthly precipitation (rain and melted snow) averaged 2.48” across NJ. This is 1.13” below the 1981–2010 average and is the 43rd driest November since 1895. It is worth noting that most of the National Weather Service stations that go into determining this average report in the morning. Thus the rain that fell later on the 30th is not factored into the monthly average; rather, it will be part of the December total. Snowfall averaged 0.4” for NJ but broken into regions amounted to 1.3” in the north, 0.1” central, and 0” south. The statewide total is average for Novembers between 1981–2010 but 0.7” below the 1894–present average.

Despite a few cold spells, the average statewide November temperature of 46.8° was 1.6° above normal. This ranks as the 17th mildest November of the past 122 years.

There were five events where 0.50” or more rain or the melted equivalent of snow fell at one or more locations across NJ. The first of these did not occur until the daytime hours of the 9th when Maplewood saw 0.59”, Westfield 0.53”, and Pennsville (Salem) and Montgomery (Somerset) 0.50”. Elsewhere, several tenths of an inch fell over most areas, with the least occurring in the far northwest and along the Atlantic coast. The overall dry conditions during the early month contributed to a brush fire covering over 50 acres in Wawayanda State Park in West Milford (Passaic) on the 13th–14th.

A more substantial storm soaked portions of the state during the first half of the 15th. A heavy band of rain swung from Monmouth County up into the northeast and then westward into the Highlands. Top honors went to Little Falls (Passaic) with 2.32”, followed by 2.31” at Harrison, Wayne (Passaic) 2.28”, Palisades Park 2.13”, and Rumson (Monmouth) 2.10”. Some 56 of the 203 CoCoRaHS reports exceeded 1.00”, while in west central and southwest areas no rain was observed in Washington (Warren), Philipsburg (Warren), and Salem (Salem).

A very mild afternoon on the 19th was followed by a powerful frontal system that began to spread rain into western areas of the state come mid-evening. The precipitation quickly mixed with or changed to sleet and snow in northern and central locations, accompanied by lightning and thunder in several locations. Rain and melted snow amounted to as much as 0.80” in Palisades Park, 0.72” in West Milford, and 0.70” at both Hawthorne (Passaic) and Andover (Sussex). Most of the northern half of NJ received 0.25”–0.50”, with less than 0.10” south of Interstate 195. Twelve of NJ’s 21 counties received measurable snow, with five of them seeing an inch or more accumulate at one or more locations. The largest totals in these counties, along with a few other reports, include 6.7” in Highland Lakes, 6.5” at High Point, and 6.0” in Vernon, all in Sussex County, 4.5” in West Milford, 4.0” in Green Pond and 3.5” at Schooleys Mountain, each in Morris County, 3.2” in Glen Gardener (Hunterdon), and 2.0” in both Liberty Township and White Township in Warren County.

Heavy rain fell over most of New Jersey from pre-dawn to late evening on the 29th. Some 160 of the 225 reporting CoCoRaHS stations received over an inch. Topping the list was Cranford (Union) at 3.25”, followed by South Plainfield (Middlesex) 3.19”, Woodbridge (Middlesex) 2.36”, and Maplewood 2.32”. The wettest swath lined up from southern Hunterdon County northeast to Hudson County. Totals tapered off to less than an inch in the far northwest and below northern Burlington, northern Ocean, and central Monmouth counties. Only 0.10” fell at Wildwood Crest, with 0.14”, 0.18”, and 0.21” at three Middle Township stations.

Rain resumed around daybreak on the 30th and continued into the predawn of December 1st. As mentioned previously, most event reports will factor into December precipitation totals, but since the majority of the rain fell on the 30th it is worth noting in this report that Stockton (Hunterdon) led the way with 2.00” and 1.72” at two locations, followed by 1.75” in Vernon, 1.71” at Ringwood (Passaic), and 1.68” in Denville (Morris). Heaviest totals were from Mercer and Middlesex counties northward, once again tapering toward the far south. Cape May County again took it on the chin, with less than 0.20” reported.

November temperatures told a tale of two seasons, ranging from 16° to 82°. There were 12 days with the thermometer at or above 65° somewhere in the state and 15 days with the minimum 25° or colder. Given the dry conditions underfoot and atmospherically, there were some wide diurnal temperature ranges early in the month. For instance, Walpack (Sussex) had a high of 72° and low of 20° on the 8th, when Basking Ridge (Somerset) ranged from a statewide maximum of 73° to a minimum of 23°, second coldest in NJ. Walpack was the warmest and coldest location in the state on three occasions, ranging from 37° to 75° on the 2nd, 26° to 60° on the 10th, and 16° to 66° on the 14th.

As noted above, New Jersey was not immune to cold air during November. As usual, the coldest locations were either in the higher northwest elevations, especially when cold air was invading the state, or in northwest valleys on calm clear nights. However, there were the occasional exceptions. Walpack and Basking Ridge recorded 23° minimums on the 1st. Walpack followed with lows of 25° on the 5th and 6th before falling to 19° on the 7th and to 20° on the 8th, with Pequest (Warren) and Basking Ridge at 23°.

Cold air blew into the state with mid-winter wind chills on the 20th when High Point Monument fell to 25° and then to 24° on the 21st. Maximum temperatures stayed below freezing at the Monument on both days at 31° and 29°, respectively. The 22nd only saw a 31° maximum at the Monument, however, the coldest minimums were in south Jersey, with 23° at Woodbine and 24° at Piney Hollow (Gloucester). Woodbine fell to 20° on the 23rd, along with 21° at Pequest and 22° at Piney Hollow and Greenwich. Pequest was coldest on the 26th at 25°, with Kingwood (Hunterdon) 22° on the 27th and Kingwood and Walpack 18° on the 28th.

On the 23rd, several other coastal stations had dipped below freezing for the first time this season. West Cape May and Newark Airport reached the freezing point for the first time on the 28th. Still, there was not one November morning when all NJWxNet stations were at or below the freezing mark. With the end of the growing season across NJ, a look at the range in dates between freezing temperatures at various locations shows the common wide dispersion. West Cape May had freeze free conditions from April 7th to November 27th, which amounts to 235 days. Newark was close behind with a 231-day growing season, followed by Atlantic City Mariana at 226 days and Harvey Cedars (Ocean) at 225 days. On the other hand, Walpack was only freeze-free from May 17th to September 25th, which amounts to 132 days. High Point Monument followed with a 161-day growing season, with a 172-day season at Pequest.

As has been the case throughout the past year, seasonal mean temperatures were above average across the Garden State this past fall. The 57.8° average was 2.7° above the 1981-2010 normal. This ranked 6th warmest back to 1895, though it was only the 5th warmest since 2005 (Table 1). This past summer ranked 2nd warmest, spring 10th, and winter 2nd.

Table 1. The 10 warmest falls (September–November) across New Jersey since 1895.