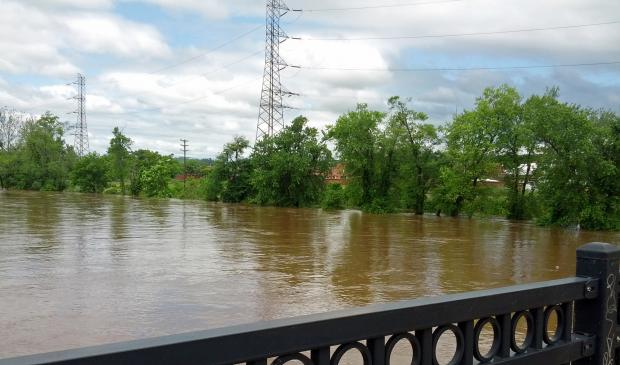 Rain, rain and, more rain was the theme for New Jersey weather in June 2013. When all was said and done, statewide average precipitation totaled 9.57", a record for any June back to 1895 (Table 1). Temperatures were above average too. The average of 71.3° was 1.2° above the 1981-2010 mean and ranked as the 19th warmest June. These averages are derived from an evaluation of several dozen long-term National Weather Service Cooperative Observing (Coop) stations situated throughout the state.

More on thermal conditions later in this report, but first back to the precipitation. The 9.57" total was 5.55" above the 4.02" average. Tropical Storm Andrea brought the most abundant rain of the month, but there were 13 days during the month when an inch or more accumulated at one or more locations. A point of information is warranted here. While over an inch fell in some locations on the afternoon of the 30th, most Coop observers had already reported for the day, as had Community Collaborative Rain, Hail and Snow Network (CoCoRaHS) observers. Most take measurements close to 7 AM, with the historic rule being that the morning observation "ends" that particular calendar day. Thus any rain after that time on the last day of a month is reported on the 1st of the following month. While this practice can be debated, one can only compare June 2013 with previous Junes by following suit.

No location in the state was spared the wet conditions, with the southwest, west central, and northern coast being wettest and the far south and portions of the northeast least wet. Taking top honors was Pittsgrove (Salem County) with 13.07", followed by Franklin Township (Gloucester) at 13.00", Washington Township (Gloucester) 12.63", Belmar (Monmouth) 12.62", Medford Lakes (Burlington) 12.46, and both Tabernacle (Burlington) and Ewing Township (Mercer) with 12.43". Some 15 of the approximately 200 CoCoRaHS stations across the state caught between 12.00" and 13.07" and 60 stations came in with 10.00"-11.99". The Coop network historical database shows top June individual station honors staying with Pottersville (Morris) back in 1972 with 15.53".

Table 1. The ten wettest Junes across New Jersey since 1895.

The late May-early June heat wave was broken from the afternoon of the 2nd into the PM hours of the 3rd by showers that deposited as much as 2.01" in Hamilton (Mercer) and 1.95" at New Brunswick (Middlesex). The heaviest rain was in northern Cape May County and in the vicinity of I-195 in central NJ. Only a few tenths fell in the northwest. Trees were reported down in Pittsgrove (Gloucester) and hail up to a half inch in diameter was observed in Toms River (Ocean) and Jackson (Ocean).

As Tropical Storm Andrea made her way up the East Coast rain began in southern areas during the evening of the 6th and encompassed the entire state during the 7th, finally tapering off very early on the 8th. Four stations out of approximately 200 CoCoRaHS stations reporting saw more than 5" of rainfall. They included Toms River (Ocean) at 7.72", Bedminster (Somerset) 5.53", Ocean Township (Monmouth) 5.15", and Rumson (Monmouth) 5.02". 52 stations reported between 4.00"-4.99", 104 between 3.00"-3.99", 51 from 2.00"-2.99" and only 6 under 2.00", the least being received at the Cape May and Middle Township stations in Cape May County. Storm totals are mapped here and show the wettest locations to be along the northern coast and in Mercer and Somerset counties with over 4". South and west Cape May, eastern Cumberland and western Atlantic counties saw the least, generally in the 1-2" range. Street, stream, and minor river flooding occurred, being most pronounced along the Millstone River within the Raritan basin of central NJ. Wind was not an issue during this event, with peak gusts most in the 20-30 mph range, with only a few stations gusting into the 30s mph, including Wantage (Sussex) at 33 mph and Harvey Cedars (Ocean) at 32 mph.

From early on the 10th into the early morning of the 11th moderate to heavy rain again visited the state. The heaviest fell in the Delaware Valley and across central NJ eastward to Monmouth County where over 1.50" fell. This included 3.36" at Brick (Ocean), 3.02" in Belmar (Monmouth), and 3.00" in Hainesport (Burlington). 17 CoCoRaHS stations reported 2.00"-2.99". The southeast saw less than a half inch and 1.00"-1.50" fell in the northeast.

The morning of the 13th until early on the 14th saw yet more rain fall. The bulk of the rain in the south was part of a mini-derecho complex that sped across the region from west to east during the morning of the 13th. Winds were not overpowering but the combination of wind and rapid changes in atmospheric pressure may have been the contributing factor to a meteotsunami that was reported along the NJ shoreline and recorded on tide gauges up and down the East Coast during the mid afternoon. An interesting report on this event may be found here. Rainfall over the course of the entire 24-hour episode was as high as 2.08" at Greenwich (Cumberland), 1.95" in Flemington (Hunterdon), and 1.93" in Holmdel (Monmouth). Cumberland County, the I-78 corridor in north central NJ, and the extreme northern tier of the state saw 1.50"-2.00" with only a few tenths in Camden and Cape May counties. Trees and power poles went down in Deerfield (Cumberland) and hail from rice to a half inch in diameter was reported in Flemington (Hunterdon) and Linwood (Atlantic), respectively.

Afternoon and evening showers and thunderstorms were the rule throughout the remainder of June. Not every day saw storms, and in fact the 19th-22nd saw clear skies with cool mornings and mild afternoons. However when rains fell they were locally quite intense. The 14th brought storms that included pea-size hail to Lebanon (Hunterdon). Sussex (Sussex) received 1.83", while Montague (Sussex) and Upper Township (Cape May) saw 0.93". These reports demonstrate that northwest and southeast areas saw the most rain, with the northeast and southwest corners of the state seeing little.

While no location received an inch or more in storms on the 16th it is worth noting that rain fell south of the Atlantic City Expressway, amounting to 0.55" in Pittsgrove (Salem) and 0.51" at Buena Vista (Atlantic). The southwest corner of NJ saw rain on the 17th, as did west central spots, while little fell elsewhere. Greenwich (Cumberland) and Union Township (Hunterdon) both received 1.28". Quarter to half-inch diameter hail was observed in Pittsgrove (Salem), Woodstown (Salem), Greenwich (Cumberland), and Union Township. Trees and power lines went down in Upper Deerfield (Cumberland) and at Clinton and Readington in Hunterdon County.

Heavy rain exceeding 1.00" fell in south Jersey on the 18th, with more than 1.50" over the Pinelands. A few tenths to a half-inch fell in the north, with up to an inch in the Highlands. Tabernacle (Burlington) took top honors with 3.07", followed by Elk Township (Gloucester) 2.78", and Pitman (Gloucester) 2.61". Trees were toppled in Robbinsville (Mercer), Upper Freehold (Monmouth), and Glendora (Camden).

Localized storms impacted Burlington and western Monmouth and Ocean counties on the 23rd. Woodland Township (Burlington) caught 1.31", Pemberton (Burlington) 1.05", and Jackson (Ocean) 1.03". Little to no rain fell elsewhere. An extremely isolated storm drenched Cream Ridge (Monmouth) with 2.41" on the 24th. The next largest total was 1.13" in Berlin Township (Camden), while Collingswood (Camden) received 0.85". A few tenths fell from the southwest up into western Monmouth County and other scattered areas. Trees went down in Southampton (Burlington). Hail was reported in Frenchtown (Hunterdon), Wantage (Sussex), and Collingswood (Camden), ranging from quarter inch to seven eighths in diameter to rice size, respectively.

Continuing the afternoon stormy, wet regime, the 25th brought 1.10" to Peapack-Gladstone (Somerset) and 0.84" to Washington Township (Morris). The I-78 corridor and Gloucester County received several tenths to a half inch, with nothing to under a tenth falling elsewhere. Trees were reported down in Tewksbury (Hunterdon), Bernardsville (Somerset), both Gibbstown and Pittman in Gloucester County, Hammonton (Atlantic), and northwest Camden County. The 26th brought afternoon and evening storms that focused the heaviest rain from the southwest to the northern coast. Two locations in Ewing received 2.55" and 1.74". Franklin Township (Gloucester) had 1.54" and Ocean Township (Monmouth) 1.50". Trees were reported down in Holmdel (Monmouth).

Heavy evening rain on the 27th plagued the western half of the state, especially from Mercer County northward to eastern Warren and southwestern Morris where flash flooding occurred. Lawrence Township (Mercer) received 3.31", Pennington (Mercer) 3.22", and Montgomery Township (Somerset) 3.05". Some 14 other stations received from 2.00"-2.99". Little rain fell along the coast. The southwest corner of NJ saw storms later on the 28th. Gloucester County reports included East Greenwich with 1.82", Washington Township 1.43", and Glassboro 1.31". Lesser amounts fell toward the southern and central coast with little elsewhere.

As stated earlier, the heavy rains in southwest NJ on the 30th (as much as 3.27" in Woodstown (Salem)) will be included in the July 2013 report.

While there were not an excessive number of hot days in June, and locations dropped below 50° on occasion, the month was warmer than average due to multiple nights with temperatures in the upper 60°s into the 70°s. The first heat wave of the season that began in late May culminated with temperatures reaching 94° in Hawthorne (Passaic) and 93° in Hillsborough (Somerset) on the 1st and 91° in Sicklerville (Camden) on the 2nd. The 90°s did not return until the 23rd, which began a five-day hot spell across the state. Hawthorne and Walpack (Sussex) got to 90° on the 23rd. The 24th was the hottest June day, with Hawthorne and Jersey City (Hudson) up to 95°, five stations at 94°, and 35 from 90°-93°. Twelve other stations ranged from 84° (Atlantic City Marina) to 89°. The 25th was almost as warm, with Hawthorne and Hillsborough up to 94°, and High Point Monument (Sussex) the "coolest" location at 84°. The 26th saw ten stations in the southern half of the state get to 91° but the Monument only got to 77°. Finally on the 27th New Brunswick was 91° and Cherry Hill and Hillsborough 90°.

Barometers across the state rose to a monthly high of approximately 30.35" on the 21st, and fell to about 29.40" on the 13th as the mini derecho roared through.

With the midway point of the year having been reached, it might interest some to see how New Jersey has fared in the weather department the past six months. The statewide average temperature of 48.2° was 0.7° above average. This made for the 25th warmest first half of the year over the past 119 years. Statewide average precipitation (rain and melted snow) was 25.52". This is 2.87" above average and ranks as the 20th wettest. Examining individual station records finds four stations above 30.00" for the year to date. These include Belmar (Monmouth) at 30.96", Pittsgrove (Salem) 30.65", Washington Township (Morris) 30.22", and Ringwood (Passaic) 30.13". On the low end, Wildwood Crest (Cape May) only totaled 20.50", Middle Township (Cape May) 21.42", Burlington (Burlington) 21.54", and Andover (Sussex) 23.14".