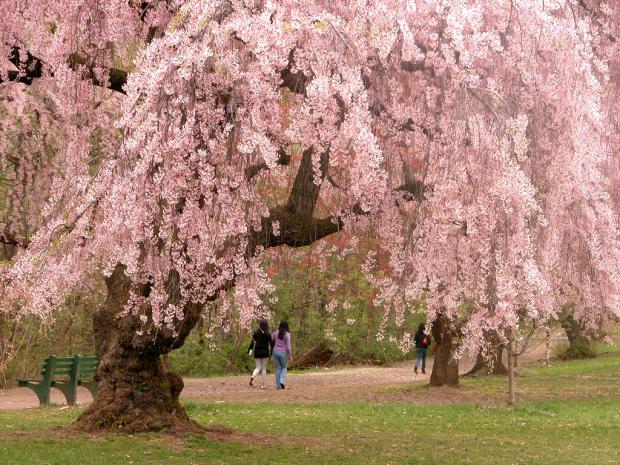 Precipitation averaged 3.87” across NJ, which was 0.12” below normal. This includes the heavy rain that fell on March 31st after approximately 7AM, as most of the National Weather Service (NWS) Cooperative stations that are used to compute statewide averages include post-7AM rain in the report dated the next day (see the March report for information regarding this storm). This ranks as the 45th wettest April since 1895.

Winds were not as fierce in April as they were in March. Gusts equaled or exceeded 40 mph at one or more locations on seven days, although on four of them this mark was only achieved at the NJ Weather Network’s (NJWxNet) High Point Monument (Sussex County). No measurable snow fell at any location during the month.

Eight April days saw the temperature reach 80° or higher at one or more of the 65 NJ Weather Network stations, and the 29th saw the first 90° readings of the year. Hamilton (Mercer) and Howell (Monmouth) topped out at 83° on the 10th, with 33 other NJWxNet stations reaching 80°–82°. This was a day of wide extremes. Thanks to a sea breeze off the still cool Atlantic waters, Harvey Cedars (Ocean) only got to 56°. The day began cool, with the afternoon warm up resulting in 23 NJWxNet stations having diurnal temperature ranges of 40° or greater. This was led by Walpack (Sussex) with a 51° range, from a morning minimum of 31° to a maximum of 82°. The 11th saw Walpack and Wayne (Passaic) rise to 87° and 47 stations between 80°–86°, while Harvey Cedars only reached 59°. Cape May Courthouse (Cape May) and Woodbine (Cape May) hit 81° on the 12th and West Creek (Ocean) 80°.

On the 16th, stiff southwest winds across the entire state brought very warm temperatures all the way to the Jersey shore. Egg Harbor Township (Atlantic), Hamilton (Mercer), Oswego Lake (Burlington), Toms River (Ocean), and West Creek all made it to 89°. 41 stations were between 85°–88°. Only High Point Monument at 78° and Fortescue (Cumberland) with 73° failed to reach 80°. Fortescue’s location right on the north shore of cool Delaware Bay and the 44 mph SSW gust observed on the 16th explained the lower temperatures there, while gusts to 42 mph from that direction kept a sea breeze from chilling Seaside Heights (Ocean), which reached 87°.

The 20th saw Piney Hollow (Gloucester) reach 80°. On the 27th, Hamilton (Mercer) and West Deptford (Gloucester) topped out at 81°, with six stations at 80°. The thermometer rose to 87° at Hamilton (Mercer), Howell, New Brunswick (Middlesex), Sicklerville (Camden), and Toms River on the 28th. The 29th was the warmest April day, with Egg Harbor Township and West Creek reaching 91° and Woodbine 90°. Some 39 NJWxNet stations rose to 85°–89° and 19 were 80°–84°. High Point Monument was coolest at 75°.
The 91° at the NWS Atlantic City Airport station in Pomona (Atlantic) was one degree off the record for the date reached in 1974.

Despite the overall April warmth, on 13 days the temperature did fall to the freezing mark or lower at one or more locations across NJ. However, only three NJWxNet locations were that cold after the 9th. High Point Monument fell to 29° on the 1st, Walpack to 28° on the 2nd, and Walpack to 27° and Pequest (Warren) and Berkeley Township (Ocean) each to 29° on the 3rd. The Monument fell to 31° on the 7th and Walpack to 29° on the 8th. The 9th was the coldest morning of April, with Walpack down to 23°, Pequest and Berkeley Township each at 25°, 13 stations 26°–29° and 30 locations 30°–32°. Harvey Cedars was mildest at 43°.

Heavy rain fell along the northern Jersey coast at several locations in April, while the coastal south was on the dry side along with the northwest corner of the state. Ocean Township (Monmouth) saw two Community Collaborative Rain, Hail, and Snow Network stations come in with 9.27” and 7.42” monthly totals. Other impressive totals include 9.27” and 8.63” at two Long Branch (Monmouth) locations, 8.62” in Eatontown (Monmouth), and 7.94” at Lavallette (Ocean). In Cape May County, Ocean City only saw 2.16” for the month, Wildwood Crest 2.93”, and Middle Township and Buena Vista each came in with 3.43”. Liberty Township (Warren) caught 3.13”.

Six events saw more than a half-inch accumulate at one or more stations across the state. Rain began late on the 3rd and was heavy during the pre-dawn hours before ending with some afternoon showers. Heaviest totals were in Bergen County, where Saddle Brook and River Vale each received 1.45”, and North Arlington and River Edge each came in with 1.42”. Of 220 CoCoRaHS reports, 53 exceeded 1.00”. Half inch or greater totals were common north of Interstate 195, with 0.25”–0.50” south of there.

Morning drizzle and afternoon thunderstorms on the 6th brought as much as 2.35” to Lavallette, 1.58” in East Greenwich Township (Gloucester), 1.36” to Point Pleasant Beach (Ocean), and 1.35” in Califon (Hunterdon). Some 93 stations exceeded 1.00”, with Delaware Valley locations from Salem to Sussex counties and the northern coast mostly over an inch. About 0.50” fell in the southeast for the lowest amounts. Some trees and power lines went down in portions of south Jersey as a result of strong straight-line winds.

Mainly dry conditions prevailed for the next two weeks, until late on the 19th into the early hours of the 20th when rain skimmed the far northern reaches of the state. Montague (Sussex) saw 0.52” and Wantage (Sussex) 0.42”, with more than 0.25” north of Interstate 80 and less to none elsewhere. More meaningful rains followed on three occasions to close out the month. Periods of rain fell from the pre-dawn hours through the morning of the 20th, only to return again during that same interval on the 21st. The first shot of rain was mainly in the far south and north of Interstate 78, while the second one was through Burlington and Ocean counties as well as in portions of Cape May County. Combined, as much as 0.94” accumulated in Middle Township, 0.91” in Pine Beach (Ocean), 0.84” at Mine Hill (Morris), and 0.83” in Ringwood (Passaic).

The early morning hours of the 29th saw a cluster of strong to severe thunderstorms race across a swath of central NJ. Continuous vivid lightning accompanied the storms, accompanied by brief downpours. Rainfall was heaviest in the west, with three Flemington (Hunterdon) stations receiving 1.66”, 1.52”, and 1.27”, and Stockton (Hunterdon) 1.34”. Further east, Woodbridge (Middlesex) saw a quick 1.30” and Carteret (Middlesex) 1.26”. Little to no rain fell to the north or south of this band.

Ground water, river, and reservoir levels responded well to March rains and snows and early April rains. This helped to erase drought concerns across most of New Jersey, thus on April 11th for the first time since April 12, 2016, the US Drought Monitor map showed “abnormally dry” or “drought” designations absent from the entire state (this in part was based on the recommendation of the State Climate Office). The next day, the drought warning and watch that had been issued by the NJ Department of Environmental Protection in late October 2016 was lifted for much of NJ. As of late April, the warning remains in place for Hunterdon and Somerset counties due to the Spruce Run and Round Valley reservoirs remaining about 20% below average.

Barometric pressure was highest on the 19th, at about 30.50” of mercury. The barometer bottomed out on the 6th at about 29.20”. The strongest winds occurred on the 6th when Fortescue gusted to 58 mph, Harvey Cedars 55 mph, Sea Girt (Monmouth) 49 mph, and four stations from 44–46 mph. High Point Monument reached 48 mph on the 7th and 47 mph on the 8th, though no other station reached 40 mph. The 16th was the second windiest day of April, with Fortescue to 44 mph, Seaside Heights and Stewartsville (Warren) to 42 mph, High Point Monument 41 mph, and 24 NJWxNet stations gusting to 30–39 mph. The Monument site reached 40 mph on the 17th, Seaside Heights and Sea Girt each to 43 mph on the 25th, and the Monument to 42 mph on the 29th. 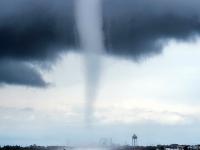